Nineteen Teignbridge Trotters travelled to the Thames Valley over the weekend, to celebrate the forthcoming nuptials of veteran member Mike Eveleigh. A Stag weekend for a running club would be incomplete without a gentle race on the Sunday morning after the night before. The light undulations of the Wargrave 10k road race fitted the bill perfectly. Organised by Wargrave Runners, with a start and finish at the recreation ground, the event was well patronised with a total of 628 finishers.

Ronnie Jones led the team home in 15th overall position, with a time of 37:15, closely followed by Dave Tomlin who was 17th in 37:28. Third Trotter across the line, in 31st position was Garry Smart (38:44) with Mike Eveleigh in 40:17. The award of First Male Team prize rounded off a very memorable weekend.

Meanwhile back in Devon, four other club members were flying the flag at the inaugural Plym Valley Challenge, a 9 mile multi terrain race hosted by Instinctive Sports of Plymouth, in aid of St Luke`s Hospice. Julia Proctor led the Royal Blues home in a time of 1:24:57, 88th in a field of 160 finishers. She was followed by Nikki Kennard (1:25:45), Eleanor Taylor (1:29:35) and Steve Rawlinson (1:31:30).

Further north Mark Hamling, Helen O`Malley and Graham Penn took part in the Ruby Run Half Marathon. Staged alternately between the two towns of Hatherleigh and Holsworthy, it was the turn of the former to host this year`s event. The well marshalled route along the A3072 contained some quite lengthy climbs with a final punishing hill towards the finish. First over the line was Mark, 38th overall in a field of 156 finishers, with a time of 1:44:22. Helen was next (1:53:22) followed by Graham (1:56:56) 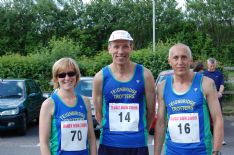