It has been yet another entertaining time for the Teignbridge Trotters, with a variety of races in Devon, Cornwall and Somerset.

On Thursday evening, Graham Penn attended the highly popular Trelissick Estate Summer 10k near Truro. The multi terrain course through National Trust fields and woodland contained some very challenging hills for the 250 competitors. Graham crossed the line 99th in a time of 53:05.

Friday evening saw a large gathering of Trotters at the Forest Flyer 5 in Haldon Forest Park near Exeter Racecourse. Organised by the Dawlish Coasters and now restored to the full five miles, the course is run through Forestry Commission land with several steep ascents.

Dave Tomlin led the 32 Trotters home in an impressive 32:23, 3rd overall in a field of 160 finishers. Garry Smart also defied the humid conditions to arrive in 5th position, with a time of 33:43. Third Trotter past the post was Ian Langler, 14th overall in an enviable 35:38.

Other runners flying the flag were: Mike Eveleigh (36:35), Tom Burman (37:14), Roger Hayes, in his first race of the year after recovering from injury crossed the line next, with a fine time of 37:49. He was followed by Gary Watson (38:31), Tracy Elphick (39:19) and Christian Robinson, running his first race for the Trotters in superb style, crossed the line with Roger Hales in 39:27.

On Saturday, Mark Wotton ran the Topsham 3k race with his daughter Jess. Times were not officially recorded for the 40 or so runners, but the athletic pair finished the course in approximately 25 minutes.

Graham Penn took on the Dartmouth Royal Regatta road race on Saturday afternoon. Organised as part of Regatta week by Dartmouth AAC, the 5.1 mile circular route contains several long climbs on the way towards Stoke Fleming. The course was well marshalled, with more than sufficient water stations which were well patronised in the hot and humid conditions. Graham finished 95th out of 171 finishers in a time of 42:22.

It was no day of rest for the intrepid Mark Wotton on Sunday as he took up the challenge offered by Langport Runners with their Battle of Sedgemoor 10k. Mark recorded a creditable time of 44:29, on the mainly flat course and was 144th out of 444 finishers.

Finally, the Lustleigh Show 10k race on Bank Holiday Monday attracted thirteen Trotters. The very challenging course was run in almost ideal cool and overcast conditions, with Mike Hicks leading the Royal Blues almost from the start. He arrived back in the showground in a most impressive 41:18, followed by Ian Langler in 42:55, 15th overall in a field of 116 finishers. James Henderson, continuing his recent run of successes was next Trotter home, 25th in a time of 45:35 with Roger Hayes back on form, 26th in 46:01.

Lower: Caroline Hayes arrives at the finish in Lustleigh 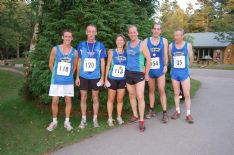 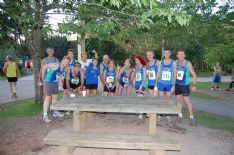 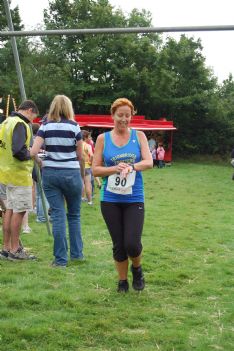