On Sunday morning, eleven Teignbridge Trotters descended on the Exeter Arena for the Guildhall Shopping Centre Great West Run. The 25th Anniversary Half Marathon, organised by the Ironbridge Runner, with a potential field of 3,000, attracts athletes, club members and charity runners alike. The course comprises two laps around Pinhoe Road, Southerhay East and the High Street, before returning to the Arena for a lap of the track.

Also on Sunday, Howard Cotton and Dave Dunn travelled to Avebury in Wiltshire, for the Neolithic Marathon. The 26.2 mile course, altered and increased somewhat this year to avoid ground-nesting birds, is multi terrain and follows the Sarsen Trail to Stonehenge. Howard finished in a fine time of 3:54:17, followed by Dave (3:56:27), in training for the Dartmoor Discovery Ultra Marathon on June 6th and running this particular event for the 4th consecutive year.

Just over the River Tamar in Saltash, lone Trotter Ewan Walton flew the flag and tackled the infamous Half Marathon. Organised by the Tamar Trotters, the event is known as one of the toughest of its kind in Cornwall, with some very unforgiving hills to tackle. Ewan battled the heat to achieve a superb time of 1:29:38 and finished 9th out of 194 runners.

Further indications of Trotters dedication to the sport were to be found in Roger Hales and Julian Head, when running the 28th Deep River Rock Belfast City Marathon on Bank Holiday Monday. The duo both completed the course in excellent times of 3:24:35 and 3:40:05 respectively.

Photo: Steve Blackburn pounds the streets of Exeter on the Great West Run 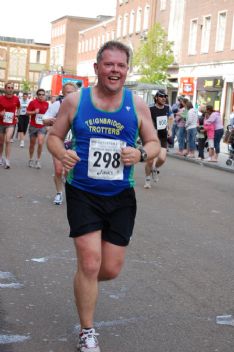