Forty seven Teignbridge Trotters were racing on Sunday at local races, and as far afield as Cardiff, Abingdon and Amsterdam. The main events for the region were the highly popular Dartmoor Vale Marathon, Half Marathon and 10k, organised jointly by the Women`s Running Network and the Rotary Club of Dartmoor Vale. Conditions were favourable - cool with pleasant autumn sun.

Starting and finishing at Newton Abbot Racecourse, the Half Marathon route is a single circuit via Chudleigh and the notorious Ugbrooke Hill, with the Marathon runners completing an additional lap.

The five Marathon runners gave sterling performances, all arriving back in under four hours. Ian Langler was first Trotter home, 11th overall in a field of 92, with a fine time of 3:13:28. Ewan Walton followed in 21st position with 3:26:43 and Roger Hales running his 50th Marathon, was 28th in a time of 3:33:19, despite being stung by a wasp! The next to cross the line in 41st position was Stewart Dunn, running his first Marathon in a spectacular time of 3:45:58, with Kevin Canham following, 44th in 3:48:44.

Mark Hamling also ran the Half Marathon and reached a golden milestone: it was his 50th such event, undertaken shortly before his 50th Birthday and he must be congratulated on such a consistently fine effort. On this occasion, he was 5th Trotter to finish, 66th overall in a time of 1:36:49 - his best 2009 time. Wavell Vigers achieved a splendid time of 1:25:30 and 27th position overall, but had entered the race as an unattached runner before becoming a Trotter.

Meanwhile a dozen more club members were pounding the streets of Kingsteignton in the 10k race. Garry Smart was first Trotter to make an appearance at the finish and was 6th overall in a field of 390, with a time of 37:08. Adrian Bailey was next, in 10th position and 37:58 (PB), with Tom Burman 14th in 39:20.

Also on Sunday, a Trotter trio descended on Cardiff for the 7th Half Marathon, run in aid of Barnardo`s Cymru. The interesting and varied route took the runners from the University in brilliant sunshine, to Cardiff Bay and through several parks, with maximum spectator support throughout.

At precisely the same time, five further Trotters were running the Abingdon Marathon from Tilsey Park Stadium. A cold but bright start to the day was a good omen for the group and Dave Tomlin, running his 21st such event, led the team through the leafy lanes and several outlying villages, before crossing the line at the Stadium, 13th overall in a time of 2:43:42. He was followed by Roy Brown, 49th with a PB for the distance, in 2:55:53.

Third Trotter home was an ecstatic Daryl Milford who achieved his goal of sub 3:30 in this, his third Marathon, crossing the line in 3:29:01, a reduction of 8:07 on his 2009 Berlin time. Tracy Elphick running her first Marathon, excelled with a superb time of 3:37:58, despite injury problems and Sharon Bowman completed the highly successful line up in 4:09:38, which was another personal best time.

Across the North Sea, two ladies were competing in the 34th Amsterdam Marathon, starting and finishing at the renovated 80 year old Olympic Stadium. The scenic route led the runners through the beautiful Vondelpark and along the banks of the Amstel River, past mansions and windmills. Belinda Collins, running her first Marathon with the Trotters crossed the line in 4:02:29, with Michelle Willocks-Watts recording 4:26:14.

In east Devon, Graeme Baker and Stephen Wallace were attending the inaugural Honi-ten, starting and finishing in Honiton High Street. The ten mile figure of eight course is run on quiet rural roads and is mainly undulating. Graeme finished 49th out of 102, in a time of 1:20:02 and was 2nd over 60, with Stephen 64th in 1:25:52.

Angela Weeks and Marion Witham were in Somerset for the Exmoor Stumble, organised by Minehead running club. A shorter version of the 15.1 mile Exmoor Stagger, the 6 mile event nevertheless covers a challenging off road route. Results are unavailable at present.

Lower: Roger `Smokes` Hales rehydrating at the Sandygate Inn, when nearing the end of the Dartmoor Vale Marathon. 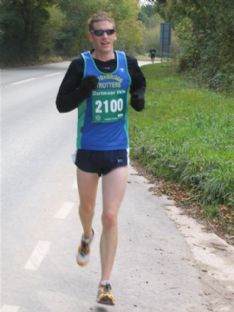 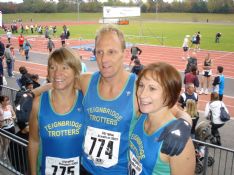 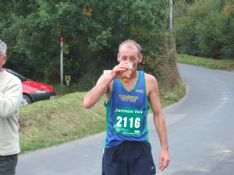