Last Sunday's severe weather led to the popular Wellington Monument road race being abandoned, shortly before the start. Ten Teignbridge Trotters had arrived at race HQ in Hemyock, with the intention of running the 25th such event, but it was obvious to all concerned that sheet ice on roads and pavements was too much of a hazard.

No one was more disappointed than Race Director Peter Hart, who nevertheless arranged, at short notice, a mainly off road `bimble` to the Monument and back, with a local runner as guide.

Saturday of the previous weekend, saw a further splash of royal blue at the annual Otterton Reindeer run. The 10k multi terrain race organised with the assistance of Sidmouth running club, had a record number of entries this year and resumed its full course, after the flood curtailment of 2008. 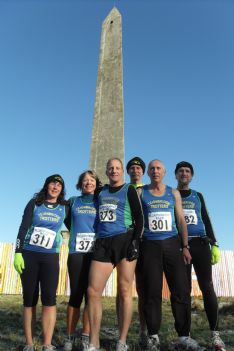 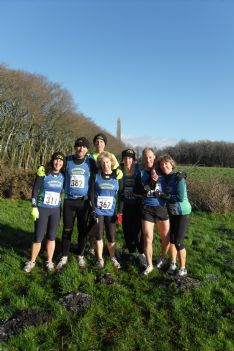