For what was arguably the best men’s elite line-up ever assembled for a marathon, several Teignbridge Trotters travelled to London to run in the Virgin Money London Marathon, which was held on Sunday 13th April.

For many marathoners this is a “must do” event and for the runners the day was made even more special knowing they were sharing the road with elites including Wilson Kipsang (the race winner and current world record holder) and Great Britain’s Mo Farah, who was making his marathon debut.  Proving once again what a fantastic club the Teignbridge Trotters is, many who weren’t able to run in the race were glued to the TV and race website to track the progress of all their club mates who were running.   As in previous years, facebook was filled with messages wishing all Trotters to have a good day and all the runners did the club proud.

In warm conditions that affected many competitors, Trotters managed some superb times and three club records were broken.  Daryl Milford brought the Trotters home in 2:50:30, which is a new V40 record.  Following his recent Half Marathon V50 club record at Bideford, Lance Mason broke the V50 marathon record with a fabulous time of 2:54:21 and was the second Trotter home.

Third home was Helen Anthony who was running for a charity close to her heart.  Helen knocked 7 minutes off her time from last year finishing in a time of 3:14:07.   Records show that this is the fastest time ever recorded by a Trottette, which in itself is an amazing achievement.

Other Trotters broke some personal milestones including Tracy Elphick and Dennis Milstead.   Tracy has been working hard on breaking the 3:30 barrier and demolished that this year with a time of 3:21:44, which she is rightly very proud of.  Also, Dennis knocked 2 minutes off of last year’s time with a new PB of 4:37:35.

Proving that hard work and dedication aren’t strictly necessary, Gary Clark managed an enviable time of 3:22:55. Having downed several (rumour has it, 9) pints the night before the race, maybe Gary has tapped into a new hydration regime that will continue to work for him in the future? Only time will tell.

As well as London, other Trotters competed in events over the last week or so.  This weekend, Derek Skinner competed in Rotterdam Marathon and finished in a time of 3:42:00.  Also, Geoff Davey competed in the Great Welsh Marathon with a time of 3:01:49. With 214 finishers, Geoff managed a great finishing position of 10th place.

On Sunday 6th April, Mark Wotton ran in the Lochaber Marathon in Scotland.  The race started in the rain and it never eased off, with the last 10K or so ran into a strong headwind. On a mainly flat out and back course, Mark completed in 4:09:21 and finished 232nd out of 328 finishers.

Top: Trotters before the start of London Marathon 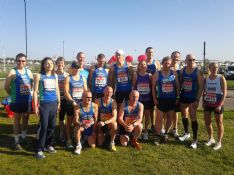 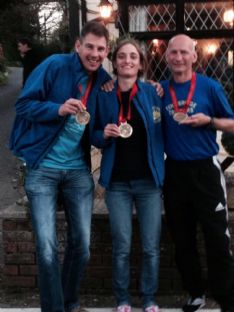