Several Teignbridge Trotters took part in the series of Roseland August Trail (RAT) events, organised by Mud Crew and ran along the South Cornwall Coast. It incorporates four different distances and all the four routes follow the same part of the coastline, with runners from different routes joining each other at different points along the way. For example, the Black RAT starts fairly flatly at St Anthony Head and then undulates more the further along the route the runners go, passing through small villages along the way with lots of steps thrown in for good measure. Organisation is excellent, with many feed/drinks stations on the way, and the option to camp being available as well.

Ryan Anthony completed the Plague last year and completed it again this year alongside 62 others, knocking 30-mins off of his time. Ryan finished the event in 49th place in 18:37:40, which is a great achievement on an extremely tough course! See some more notes from Ryan below.

Gary Clark was the sole Trotter competing in the Black RAT event. There were 130 finishers and Gary was 43rd in a time of 7:06:20,

Notes from Ryan about his Plague experience are below:
Training for me had gone as usual leading into most races, I.E., I hadn't done enough! However, I resigned myself to my favourite saying - “Mind over Matter!”

The weather was good and the Plague runners set off at 12:05am into the darkness. All was going well until the checkpoint at mile 11 and then I experienced a complete meltdown between there and the next checkpoint at mile 20. I can’t explain why but suffice to say I had decided to drop out at mile 20 over a dozen times on the route. I just couldn’t see myself finishing the event as the solitude and darkness on your own for over 2 hours and the lack of training are the 2 things that I think put me in such a horrible place.

The checkpoint at mile 20 was in a church. “Good job,” I thought, “I could do with a miracle!”. The marshals there were fantastic! They fuelled you up, got you up mentally, handed over the Red Bull and out the door you flew.

The next section involved a lot of clock watching as the cut offs were getting a little tight but with a shuffle/walk I made it halfway. Seeing Gary Clark and Roy Brown on the start of their journey back was nice. I had to make it back to Portscatho by 10am or I would be pulled off the course and I made it with 20 minutes to spare, although still not feeling great. Helen and the kids had come down from this point to see me at the checkpoints on the way back, which was a huge lift.

I had 2hrs 45mins to make it to the next checkpoint at Portloe, which was 11 miles away.  If I could get there I knew I would finish so on I trudged.

The weather was warming up by this point, which is not good for me but the occasional breeze on the cliff tops was welcome. It was around this time that I started to catch some people, which filled me with confidence. As other people were sadly starting to struggle I was feeling stronger the further I went along the course.

By the time I left Helen at Pentewan with 4.5 miles to go I was actually feeling good and any pain was pushed to the side for the final section.

I crossed the line (this time with no tears!) and saw my fellow Trotters at the end.

All in all, this event is fantastic. From the marshals and support teams to the event village. It is really something to complete a RAT regardless of distance and everyone should see it for themselves. They’re certainly a challenge!!

Ladies 10K
Teignbridge Trotters are staging the ever-popular Ladies 10K on Sunday 14th September, which starts and finishes at the beautiful Dornafield Caravan and Camping site and is ran on quiet, undulating, country lanes.  Entry forms are available on the Teignbridge Trotters website.

Top:  Ryan in the finish straight of the Plague 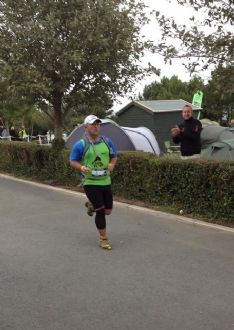 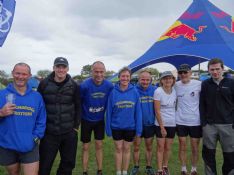