Under 18s team fly the Trotters flag in Plymouth....

Husband and wife Teignbridge trotters, Lucy and Rod Payne ran the “Bramley 10/20” Mile Road Race on Sunday 16th Febuary . The race is organised by Reading Road Runners and sets out from the sleepy village of Bramley and meanders around the gently undulating and picturesque Hampshire country lanes. On a crisp but beautifully sunny morning, as preparation for the London Marathon and the Dartmoor Discovery, Lucy and Rod joined a field of 739 runners in the 20 mile option and completed 611th and 612th respectively in a time of 3.11.10.

In Exeter the “Exeter half marathon” took place organised by Ironbridge runner. The course, after the recent very bad weather, made for pretty much perfect running conditions. The sun was out and there was no wind. There was some frost on the ground in a couple of places on the first lap, but by lap 2 of the 3 lap race that was pretty much gone. It used a similar course to the first chance race in January along Haven banks and Exeter Canal. 251 runners completed the course and five Teignbridge Trotters took part.
First across the line was Roger Hayes who was 23rd and did 1.27.37 but chasing him hard was Helen Anthony who stormed her personal best time by five minutes to complete in 1.29.29 and gaining 3rd lady and 1st vet 35.She is the first trotter lady since 1999 to break 1.30 according to records.
Graydon Widdicombe also did a Pb in 1.38.53 (73rd), Peter Kirby did 1.42.18 (92nd) and Derek Blackford completed in 1.58.41(166th)

In Plymouth the “Armada Park relays” took place in Central Park in the city. The trotters were represented with their first under 18s junior team with each member running a 2.5 mile circuit.
The team consisted of Adam Batt (16.28) ,Tom Besford(16.50),Jamie Barnett(16.13) and Kieran Crewes(14.51) making a total of 64.22 and doing the Teignbridge Trotters proud with second place to Erme Valley Harrier’s U18s.

PHOTOS- top -Rod and Lucy MIDDLE-Four of the five at Exeter BOTTOM-The boys did good ! 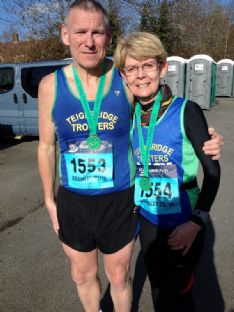 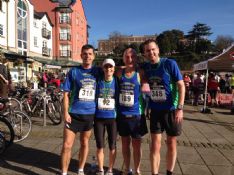 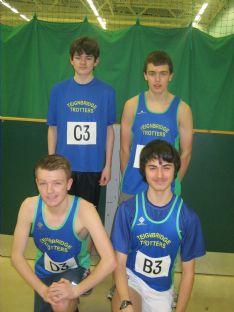