Start of the race

Holland opened up a commanding early lead and was able to hold on to it in the warm but relatively benign conditions. Like all the 2018 DD finishers, he had to contend with a special 20th anniversary route that added an extra two miles, celebrating the race’s original 34-mile course. Only one runner has completed all 20 DDs – Graham Baker, of the Mid Essex Casuals, who crossed the line in 5:53:18, winning first place in the MV65 category.

Teignbridge Trotter Chairman Roger Hayes, who is also the DD’s Race Director, joined the field himself for the anniversary event, finishing in 5.15.08. He said: ‘This year’s DD was very special and I didn’t want to miss the opportunity of running the original 34-mile route. The weather was a tad on the warm side but, thankfully, a cool Dartmoor breeze came to the rescue when we needed it most, which was during those last six miles. The original route took us up around the back of the prison and this proved to be a particularly brutal section of the race. With 32 miles already in your legs the last thing you want is yet more hills!’

The DD, which starts and finishes in Princetown, is organised by leading South West running club the Teignbridge Trotters. Renowned for breathtaking views, equally breathtaking hills and weather that always surprises, the DD is the UK’s longest single-lap road race. The event has been steadily growing in popularity since 2010, when the Trotters took over its organisation. This year, 186 finishers crossed the line, out of a starting line-up of 210 runners.

The event’s team competitions are always fiercely contested but two teams have dominated the race over the past decade. The Teignbridge Trotters men’s team scooped up the trophy for the eighth time in ten years, calling on impressive performances from third-placed Ben Mukherjee, Adam Johnstone (4:22:02 and fourth overall) and Kris Ward (5:04:03 and second MV40). The Mud Crew Trail Runners bagged the ladies’ team trophy for the fifth time in six years, thanks to strong runs from first lady Emily Warren, second lady Diane Roy and Maria Wadey (6:33:09).

Mud Crew runner Patrick Munn had an extra reason to celebrate as he crossed the line on Saturday: the 2018 DD marked his 100th marathon. The DD has become a popular choice among experienced marathoners as a fitting event at which to complete a 100th marathon. Munn was presented with a special t-shirt by 100 Marathon Club Chairman David Lewis, who ran the race on Saturday, declaring it had been the toughest course he had tackled in more than 700 marathons.

The Teignbridge Trotters fielded the club’s biggest-ever DD team on Saturday. In addition to securing first place in the men’s team event, the Totters finished the day with the ladies’ second team and men’s third team trophies.

Roger Hayes said: ‘It was an impressive, in-depth performance by our runners. Thirty-one Trotters started the race and an incredible 29 made it across the finish line. It was a wonderful achievement for our club and, as chairman, I’m very proud.’

Behind the scenes, the organisers amassed a huge team to ensure that the race ran smoothly and runners enjoyed a safe event. An estimated 150 people were on hand in a variety of roles. The Dartmoor Radio Club, Medical Events Training Services and a team of sports therapists assembled by Sue Read worked alongside scores of volunteer marshals, timekeepers and caterers. This year’s race was sponsored by Dartmoor Brewery, Sibelco, the Road Runners Club and the Ilsington Country House Hotel. 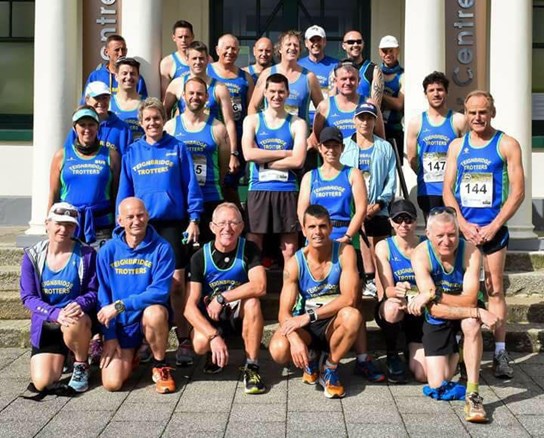 Trotters before the start of their 34-mile journey. 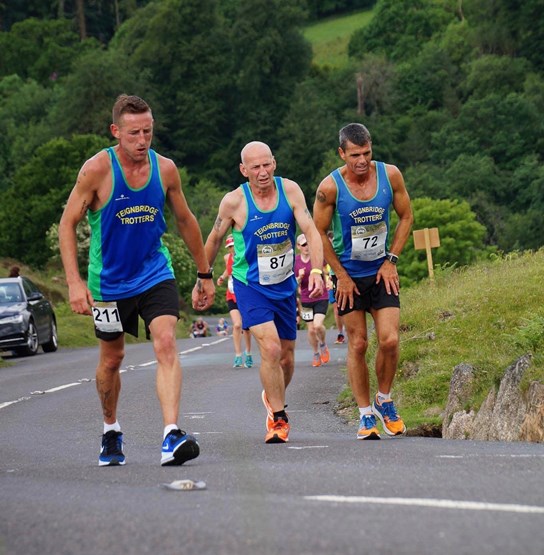 No one said it was easy! 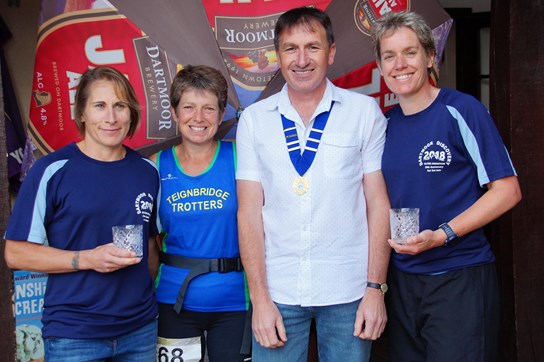