It’s pretty well known that Trotters enjoy the finer things in life such as cake, chocolate and beery nights out and it appears our men’s captain and marathon queen have found the perfect event combining all three. Oh, and a smidge of running.

Sally Ingledew and Lance ‘Skippy’ Mason travelled to the Betteshanger Country Park near Deal, Kent, to take part in a Chocothon Challenge. This event formed part of a weekend double where people could also do a - wait for it - Winter Cakeathon Challenge.

Organised by Traviss Willcox, the chairman of the 100 Marathon Club, runners were able to complete as many or as few 4.37-mile laps as they wanted around the park within a 6-hour time limit. All finishers got a fabulous choc-inspired medal and a goody bag stuffed with (you guessed it) chocolate, including a chocolate stout.

The Cakeathon was equally as yummy sounding with a cake-inspired medal and enough gooey goodies (including some for vegans) to make even Mary Berry feel faint.

*Derek Skinner and Oli Prouse headed into the depths of Dartmoor for the Wild Night Run at South Brent on Saturday 30 January.

This is a tough trail event where runners complete the course under the cover of darkness. The first five miles is mainly uphill following the river to Shipley Bridge with one or two brief descents before heading onto the expanses of Dartmoor. The second half is mainly downhill but a couple of short sharp climbs keep runners on their toes.

*MEMBERS! Don't forget this Thursday coming is the EGM. It's taking place at Newton Abbot Recreational Trust (aka 'The Rec') in Marsh Road, Newton Abbot from 7.45pm.

This sport and social club, at the heart of the town, is being put forward as the Teignbridge Trotters potential new home and training HQ. You'll get the chance to have a look around, consider proposals being put forward by the committee and answer any questions. Come and get involved (there's also a bar...) 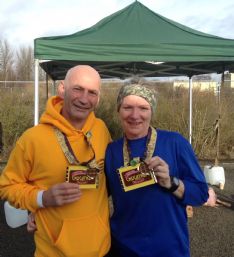