A night 10K, a race win for Peter Heckles and Richard does his final marathon of the year

Richard Keatley competed his 33rd and final marathon of 2016 taking his total to 36, which includes a 50-miler, 3-in-3 and plenty of doubles.  This weekend’s event was in Samphire Hoe in Kent. It was a really warm day for December, as just a T-Shirt was needed after a couple of laps.  It included 7 * 3.85 mile laps in total, and the event was organised by Saxons Vikings & Normans.  Richard commented that it was a really enjoyable course with roughly a mile back up to an aid station, plus a couple more along sea wall in the strong sun.  Richard finished in 4:41, and he would again like to thank all Trotters for their support this year and has big plans for next year.

Peter Heckles took part in the Brean Santa Scramble on Sunday 18th December, which is a tough, offroad, muddy, hilly 5K events.  Peter stumbled a couple of times and was also sent the wrong way, but still went on to win in a time of 21:36 to claim his first race victory.  76 competitors finished the race. 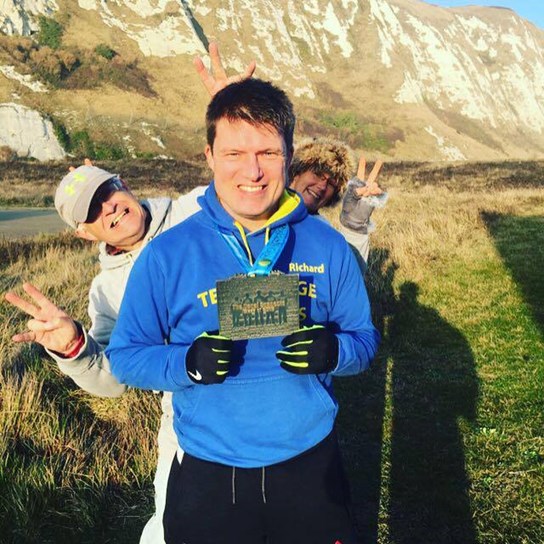 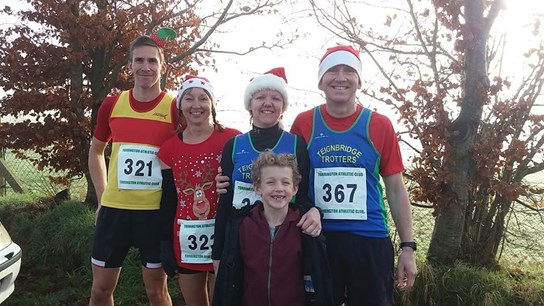 on Pressling and Cathy Parkinson of Torbay AC with Emma Pearcy and Jim Donovan of the Teignbridge Trotters with young Josh Parkinson, also of Torbay AC, at the Torrington Christmas Caper 2016