Trotters race far and wide over a busy weekend

Six Trotters travelled to Scotland to do the Edinburgh Marathon on Sunday 28th May.

Conditions were dry, windy and very warm for the well-organised and supported event, which took place on Sunday 28 May. The event starts in the city centre, passing Holyrood Palace & Arthur's Seat. The route goes along Portobello promenade and alonside Musselburgh racecourse. Before heading out along the picturesque East Lothian coastline. The turn happens at 18 miles to head back for the noisy and well-supported finish in Musselburgh. The heat made this a tough marathon for the Trotters who completed it, with an average temp of 24deg.

PBs were achieved by Daryll Hall with 4:23 & Andy Distin, knocking off an incredible 38 mins to finish in 5:12. Derek Skinner was first Trotter home in 3:38, closely followed by Peter Kirby in 3:59. Kim Nichols and Oli Prouse ran with pre existing injuries and finished well in 4:32 & 4:46 respectively. 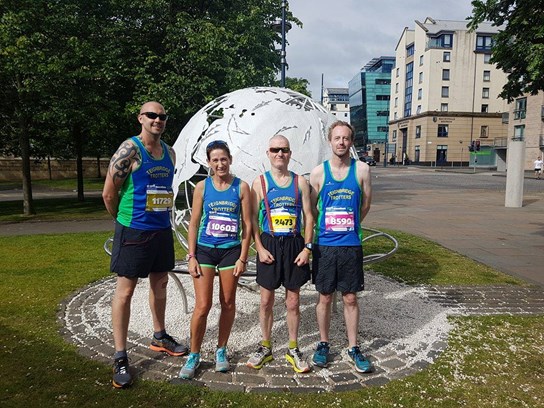 A few of the Trotters at Edinburgh 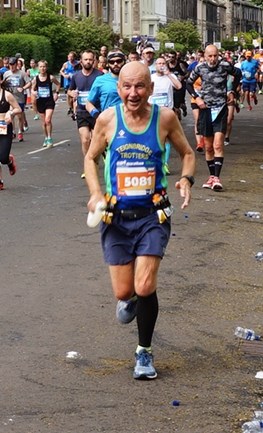 The route shows the runners the vibrant city of Liverpool and takes in Everton football stadium, Liverpool’s Anfield stadium, Stanley Park, Sefton Park, Penny Lane and goes past the iconic Cavern from the Beatles era, to name just a few!

Paul and Sharon ran dressed as hippies, in celebration of 50 years since the release of Sergeant Peppers Lovely Hearts Club Band, finishing in 5:06, with live bands playing throughout the route.

On the Saturday, the pair also did the 5K event as a little warm up for Sundays race, with both events finishing in the Echo Arena.

Sharon commented that the bling on offer was excellent (a 5K medal, a marathon medal, plus an added “Rock N Roll Remix Guitar medal”, as they’d done the two runs), and they both thoroughly enjoyed the weekend.

Kevin Besford was the sole Trotter on Sunday 28th May at the Dorchester Half marathon, finishing in 2hrs 23. Kevin said he thinks it’s the toughest half he’s ever done, and commented that it made Torbay Half look flat, and it wasn’t helped by the weather conditions, which were quite hot. .

This added extra detail probably won’t make the papers (unless the editor just copies and pastes it in without checking…..there’s always hope!), but Kevin commented that one hill was a mile in length, and was actually named “Sheep Shit Hill”!

Sam Riches ran the Larkfield 10k race in Kent, and shaved 23s off his PB with a time of 40:19. Sam mentioned that the heat got to him a bit, but he is working hard to go sub-40, which is a time that will surely come soon enough. Well done, Sam. 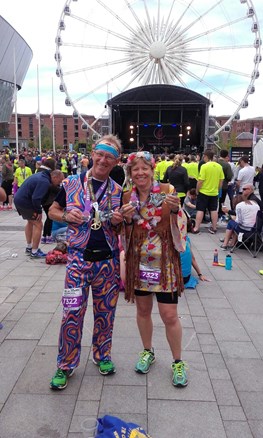 Mandy Wheeler completed the Kent Circuit Marathon on Saturday 27th May, in a time of 3:52, for 4th lady and 1st in Vet category.

The race had a very nice atmosphere, but was very hot, hilly and windy – and ran over 20 laps.  There was great support on the course and it was well organised, but Mandy didn’t especially enjoy the lapped nature of the course so isn’t too sure if she’d do it again. 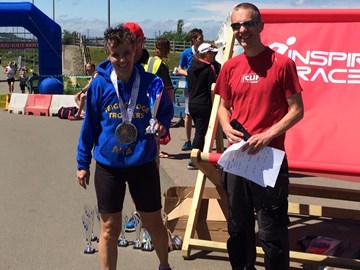 Mandy after her marathon 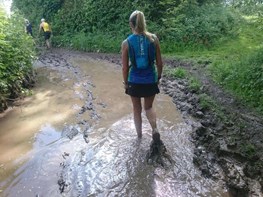 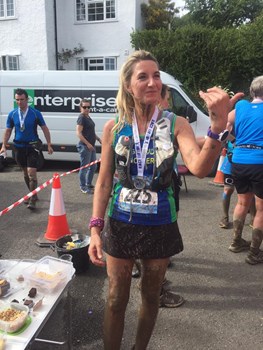 Tracey after the race

On Saturday 27th May Tracey Jolly ran the Puretrail Running, Race The Tide Long Half Marathon.

It was a 16 mile trail and coastal path race which started in the village of Holbeton, and the runners had to “race the tide” for the first 6.4 miles through the woodland trails of the Flete estate before reaching the Erme Estuary. Once across the estuary they joined the coastal path at Mothecombe, which incorporated some typical coastal path ascents.

The route was tough and challenging with 2,600ft of ascent but beautiful views and scenery and a thigh-deep muddy puddle at 0.5 and 15.5 miles to get through. The race was very enjoyable albeit hot and humid and Tracey completed it in a time of 3:24:41

Geoff said he was “hugely inspired” to be in the company of world record holders and ex-Olympic athletes at the 2017 European Long Distance Duathlon Championship at Sankt Wandel in Germany. His performance has qualified him to take part in the 2017 Powerman World Championships in Zofingdon, Switzerland, in September.

Geoff was among 12 GB athletes selected by the British Triathlon Federation for the duathlon, competing in a 10k run, followed by 60k of cycling and a further grueling 10k run. All didn’t go to plan on the event, as Geoff suffered a blow out on the front wheel on the bike but overall Geoff said he loved the event.

Look out for an interview with Geoff, in an upcoming edition of The Trotter.

Thanks for all the contributions for this week's report 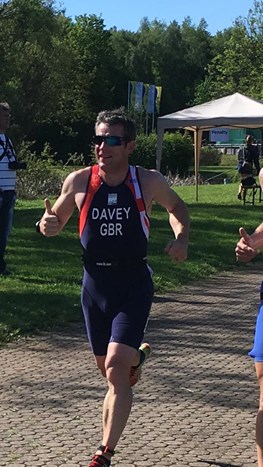