The Portland Coastal Marathon took place on Sunday 2nd February. A multi terrain tough challenge, with a 10K and a Half also on offer.

Sue Tremlett travelled to Dorset to take part in the Half Marathon. Weather conditions were poor at the start, but they did improve. Sue did question her sanity as she was awoken by the alarm at 5:30 am for a very early start!!

This race had everything, with dramatic rugged cliffs, nationally rare plants, hidden coves and stunning views. The Isle of Portland is a large mass of limestone which is linked to the mainland by the shingle ridge of Chesil Beach. Centuries of quarrying and military presence have altered the natural landscape, leaving visible records of the history of this important part of Dorset. The Isle’s white limestone has been used for construction since Roman times. Nature has reclaimed some of the disused quarries, which become a stunning mass of grasses and wildflowers in the spring and summer months.

The route took the runners in a clockwise direction around the South West Coastal Path for one loop of the island, taking them past the recently built Osprey Quay around to Portland Castle, heading up Merchants Railway to the Verne. This impressive architecture of The Verne Citadel, now used as a prison, the citadel was designed by Captain W Crossman of the Royal Engineers and enclosed an area of 56 acres on the highest point of Portland. Work began in the mid-1800s and the Great Verne Ditch took 30 years to complete.

The run continued along behind the back of the YOI and down Goat Hill, following the old disused railway line until they reached the back of Rufus Castle. The remains of the striking Rufus Castle, which is thought to have been built originally for the red-headed William II, who was nicknamed Rufus. Much of what remains dates from the 15th century. The views stretch out to the English Channel for miles. Heading along from the Castle the race descended to Church Ope Cove, the only beach on the eastern side of the island.

The next prominent point that was passed was Pulpit Rock and Portland Bill, taking in the spectacular views which extend to Start Point in Devon and to Durlston Head in the east.

Heading back towards the Sailing Academy, breath taking views were enjoyed from the top of West Cliff, back along Chesil Beach and the Fleet Lagoon, which is the largest tidal lagoon in Britain and a Site of Special Scientific Interest due to the extraordinarily rich variety of wildlife found here. The ‘Spirit of Portland’ sculpture which depicts a fisherman and quarryman to represent the two main industries of the Isle can be seen before descending down Lankridge Hill on the Southwest coastal path towards the Cove Inn.

The course provided the runners with just about everything. Stunning views, notable landmarks, steep accents and descents, varying terrain including stones, boulders, mud, shingle and much more.

The event was very well organised, plenty of marshals and the route was clearly marked.

Sue ran well to complete the very tough and challenging course in 2:41:20 to finish in 95th place. 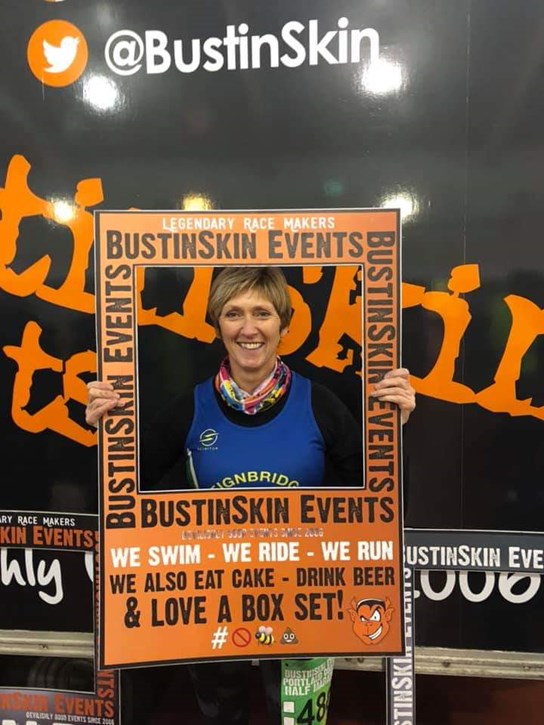 Sue Tremlett has been framed at Portland Coastal Half 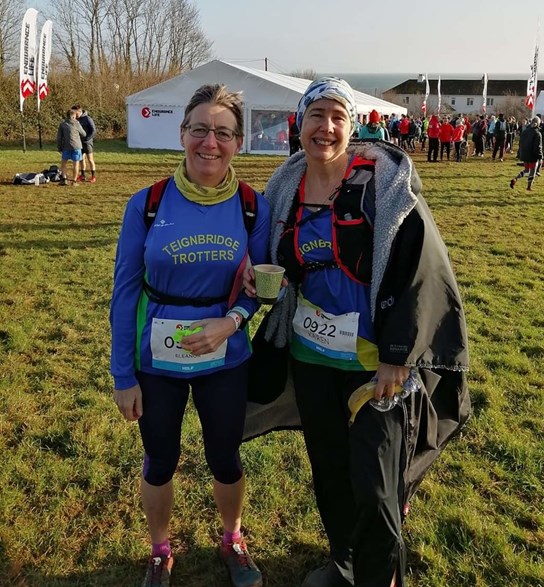 Eleanor and Karen with a well earned cuppa

Karen O'Brien and Eleanor Taylor competed in the Endurance Life Half Marathon on Saturday 1st February. There was also a 10K, a Marathon and an Ultra on the menu.

The course was set on an area of outstanding natural beauty, and is both picturesque and punishing. The underfoot conditions changed regularly throughout the race, with jagged rocks, boulders, grass, mud, shingle, and tarmac.

The race started and finished at Beesands near Kingsbridge. The runners headed out towards the South West coast path, passing Hallsands and then onto Start Point. A loop around the peninsula before the field made their way back inland, skirting Muckwell and on towards the finish line.
The terrain was hilly to say the least, with 2000 feet of elevation to climb.

Our ladies ran superbly well, on what was a lovely bright sunny day with a stiff breeze.
Karen finished in 264th place, in a time of 3:01:06.

Karen ran here in 2018, but was 37 minutes quicker this time around! A huge improvement!

Eleanor’s performance won her the FV60 age category prize. She finished just behind her club mate in 265th position, clocking a time of 3:01:17. There were 319 finishers.

Derek Skinner flew to Italy to take part in the first running of the Maga Circe Marathon.

There were three races to choose from. The Thirteen (13K), the Ventotto (28K) and the Marathon. The idea of the races was to promote tourism to this lovely part of Italy.

The race started from the historic centre of San Felice Circeo in Piazza Vittorio Veneto. Included in the old town was an ancient castle.

The runners headed out along the coastline following a long stretch of beach. At this point, the half finished but the Marathon continued with a five mile, very straight incline. Derek found this part of the course mentally tough! The elevation was mainly flat, with a few uphill’s that meandered through the country suburbs, passing typical Mediterranean house and farms.

The race finished in the centre of Sabaudia, in Piazza del Comune.

The weather on race day was just about perfect with18° temperatures and cloud overhead.

Derek, the only runner representing England, ran a great race, considering that his Achilles problem kicked in from 17 miles, causing him considerable discomfort. Derek battled on to the finish, clocking a great time of 4:07:00.

The race was extremely well organised, with plenty of water and energy drink stations along the route. The event was a great success and will hopefully encourage visitors to explore this part of the country.

Julia Street travelled to Wiltshire to compete in the Longleat 10K on Sunday.

The race start was in front of the magnificent Longleat House, an English stately home and the seat of the Marquesses of Bath. Runners ran around the estates private, traffic free roads, with only a short 400 metre stretch on public highways, passing the Bath Arms pub, before the final mile downhill to the finish.

The route was undulating and hilly in parts, with a significant climb tackled twice, once soon after the start and the second towards the end. The reward for that second climb was the final downhill run along Lodge Drive towards the house.

For children and families there was the Longleat 2 Mile Fun run. This popular support event covers the first lap of the 10km up the hill through to the Bath Arms then the magnificent run down Lodge Drive to the finish line.

The Haldon Winter Series 2nd Round took place on Sunday 2nd February. The 10K race was the second of three rounds, with points being accumulated depending on position.

Purple Gecko Events were the race organisers, and the event gave runners the opportunity to race around the undulating trails and paths of the forest. Weather conditions were dry, mild but quite windy.

Teresa Holmes was the Clubs only representative surprisingly? That didn’t deter Teresa though, as she completed the tough route in 1:19:11 to finish in 69th position. Great result.