Eight Teignbridge Trotters competed in the first edition of The Exeter Epic Trail 10K on Saturday 25th January. The event organisers Tough Runner, chose Haldon Forest as one of their race venues due to the stunning scenery, ease of access and of course the epic hills.

The race start was at Exeter race course, following a short road section passing Haldon Forest Diner, before entering Harcombe Woods. The race marshals were all very friendly and supportive along the route. The under foot conditions were poor in places with lots of muddy patches to tackle.

Kate Lenthall led our Trotters home, putting in a great performance to finish 174th in a time of 00:50:54. 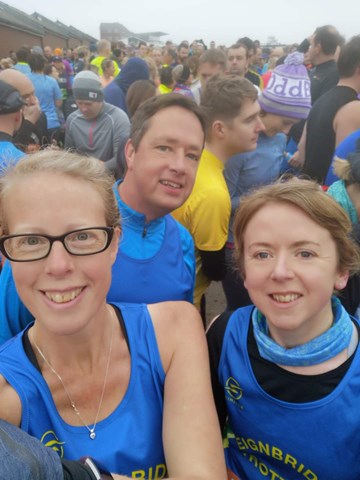 Alexis,Kat and Simon at The Epic Trail 10K 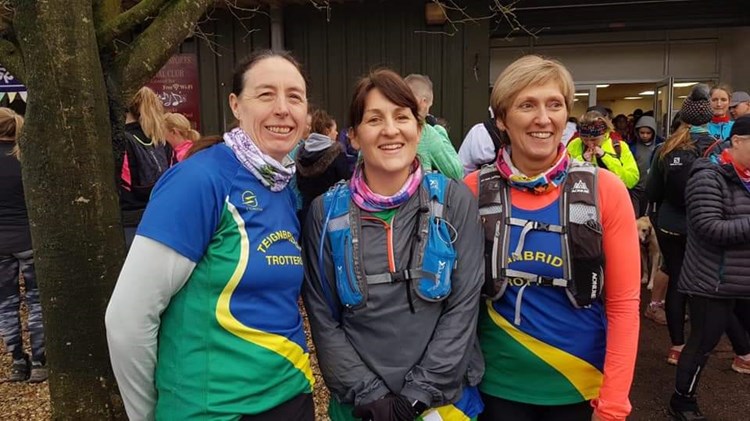 On Saturday 25th January, The Blackdown Beast took place near Honiton, organised by Honiton Running Club. The monies raised will go to The Macmillan Cancer Support.

Three of the Trotters toughest cookies took on the Beast. They were Sue Tremlett, Lucy Evans and Kay Shillabeer. 16.7 miles of hills, mud and more mud!

There were no numbers, no medals, no prizes, no times, no winners, and no marshals!! It was just a nice self-navigation social jaunt with no pressure!!

The weather conditions were dry, cold and very foggy on the day. The terrain varied along the route, but there were plenty of wet, muddy stretches to tackle at different parts of the course.

The runners followed a picturesque cross country route of 7.6 miles on seldom used footpaths to Smeatharpe. Here the runners enjoyed a hot pasty and mulled cider at Smeatharpe Village Hall as a reward for their hard work. The next leg of the run was 2.8 miles on lanes and country paths, which dropped down to the village of Upottery. The Sidmouth Arms was another opportunity to stop for more refreshments! The 10 mile option finished here. A minibus was provided to take the 10 milers back to the start.

The 16 milers continued, taking the road to Rawridge. Here the runners ran across country, crossing the river Otter before climbing up to the top of the ridge. From above Luppitt, were spectacular panoramic views of the surrounding countryside, before running the remainder of the 3.3 miles to the Luppitt Inn for another pit stop? The last 2.7 mile leg of the day was over cross country at Luppitt Common and then back to Dunkeswell for a well-earned rest with food and drink available.

Our three Beauties defeated the Beast, in what was a fun and well organised event.

Graydon Widdicombe travelled to Morocco to take part in the 31st running of The Marrakesh Marathon on Sunday 26th January. This was Graydons first Marathon outside of Europe.

The very mild climate and a beautiful flat fast course, makes this race one of the fastest in the world. The runners will travel along the dusty traffic free roads of palm, orange and olive trees and also the 12th century ramparts of the city.

The marathon started at 8:30 am, with the Half setting off an hour later. At 8:00 am while runners were gathered at the start it was still dark. A very strange experience!! Just 10 minutes before the off the sun came up! Great timing! The temperature was a chilly 6 degrees, but Graydon came prepared wearing a vest and gloves, which proved to be the correct decision.

Graydon got through the start in about 3 minutes, but the first couple of miles were quite congested, which suited Graydon as the slower pace allowed him to ease into the race as this was his first race back since a chest infection which scuppered his preparation at the end of 2019.

Graydon was on target for a 3:30 finish at 20 miles, but the lack of training started to catch up with him!! 3:35 and 3:40 slipped past before eventually finishing in a very respectable time of 3:40:55 to finish 446th out of 1211 men. He was a little disappointed by how badly he faded, but this was another Marathon ticked off on his way to the magic ton.

Graydon would certainly recommend this Marathon as the race was very well organised, climate is perfect and a potential PB opportunity. 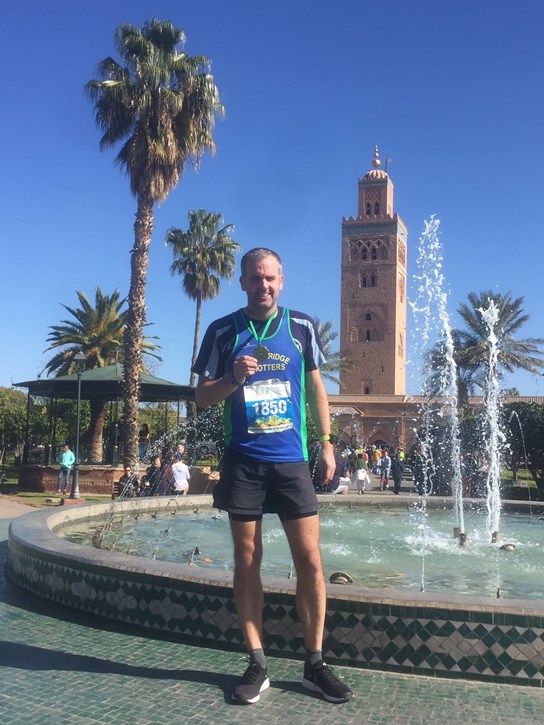