On Sunday 10th Feb, the second Club Championship race of the season took place in Taunton. The race was the Humdinger Half Marathon organised by Running Forever Running Club. There was also a 4.5 mile race held called The Hurtle.

The weather conditions were dry and mild on the day but with a strong head wind to contend with. The race was run entirely on quiet country roads although there were some rather large puddles to negotiate along the way.

With over 1000 feet of ascent, the race is one of the toughest half marathon races in the area! The runners were rewarded with some stunning views of the Quantock Hills and the Bristol Channel.

The race started near Taunton, and passed through the villages of Goosenford and Greenway before encountering the first significant climb –Noah’s Hill, just after the 2 mile mark. After the 600 feet level, the race dropped back to Volis Cross, before another climb up Volis Hill. A steep ascent followed before the new Humdinger Hill (Shelthorn Hill) challenged the field. This took the runners to the highest point of the course at 825 foot. From here on in, the course is predominantly downhill, taking in an area of ancient woodland before passing Upper Cheddon and Kingstone St Mary. The finish was another half mile after the start which provided the runners with a tough mental battle to endure.

The winner of the Humdinger was Toby Chapman in a time of 1:17:24 representing Bournemouth AC. This time was a new course record.

The race proved to be a highly successful one for the Teignbridge Trotters representatives. Roger Easterbrook finished 4th overall in a superb time of 1:23:58.

Helen Anthony was the first female home, finishing 22nd in a time of 1:35:22. Helen also won the FV40 category to round up a very successful race for her.

There were 224 very tired finishers. 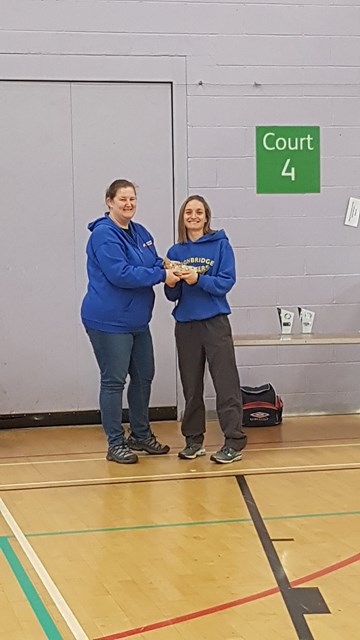 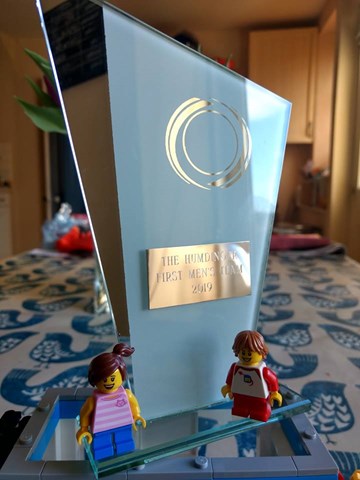 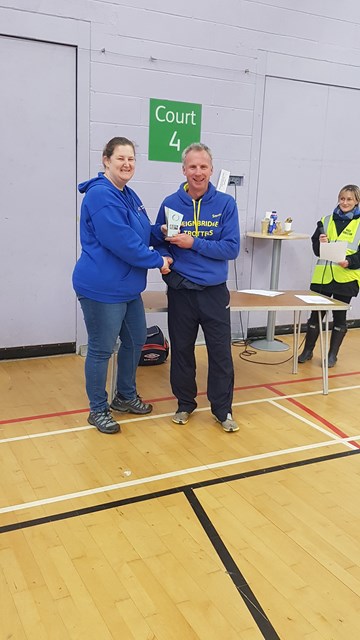 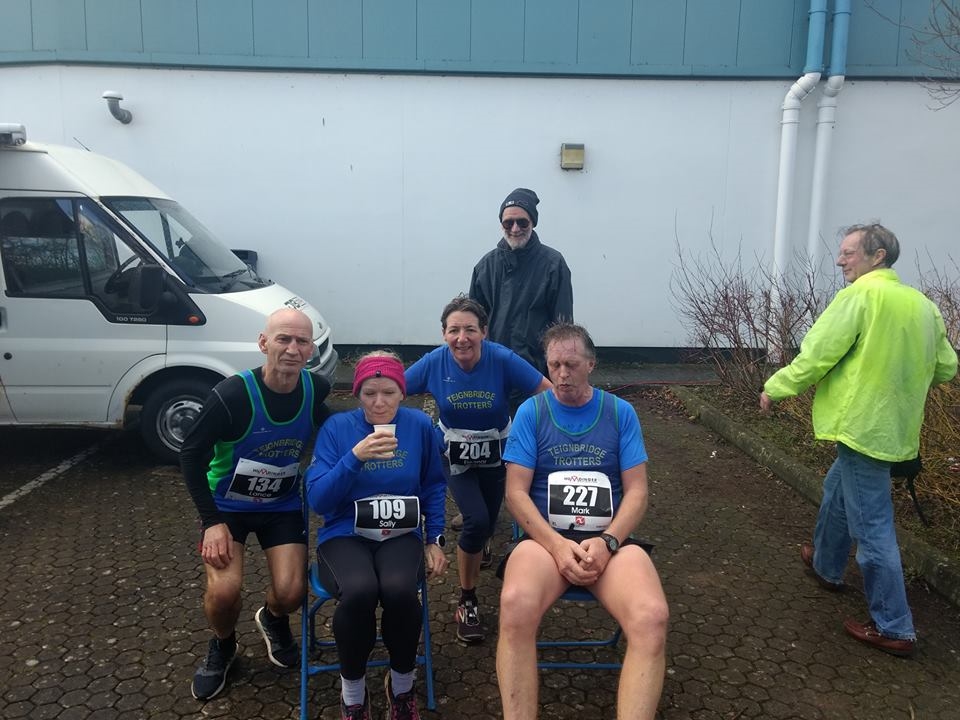 Exhausted Trotters after the Humdinger

A multi terrain marathon taking in the island of Portland. The runners set off from the Weymouth & Portland National Sailing Academy in strong winds and rain. They soon hit the first hill, taking them up onto the coast path. There were stretches of very stony ground, which was quite hard to run on, followed by a long very muddy section that was exposed due to a vicious cross wind. The rain abated thankfully for the field after about an hour, but the wind remained relentless. No wonder they held the sailing events here for the Olympics!

After a steep, slippery decent runners had a long, flat straight couple of miles on tarmac. The only trouble was that the wind was at its worst here, and it felt like you were running up hill such was its strength. The windswept runners then dog legged back to the start before retracing their steps and covered the same route, but in reverse.

The underfoot conditions were becoming even more slippery, as the half marathon runners and all the marathon runners had run over it!! There were three big climbs for the runners to negotiate on the way back that were impossible to run up. This made running the course in reverse much harder than the first 13.5 miles. With regular check points and a compulsory kit list, this race was certainly not for the faint hearted!

All four Trotters acquitted themselves admirably and can be very proud to have finished a tough marathon in even tougher conditions.

There were 92 finishers. The official distance was 27 miles.

Keith Anderson took a nasty tumble during the half marathon and sadly had to withdraw from the race. 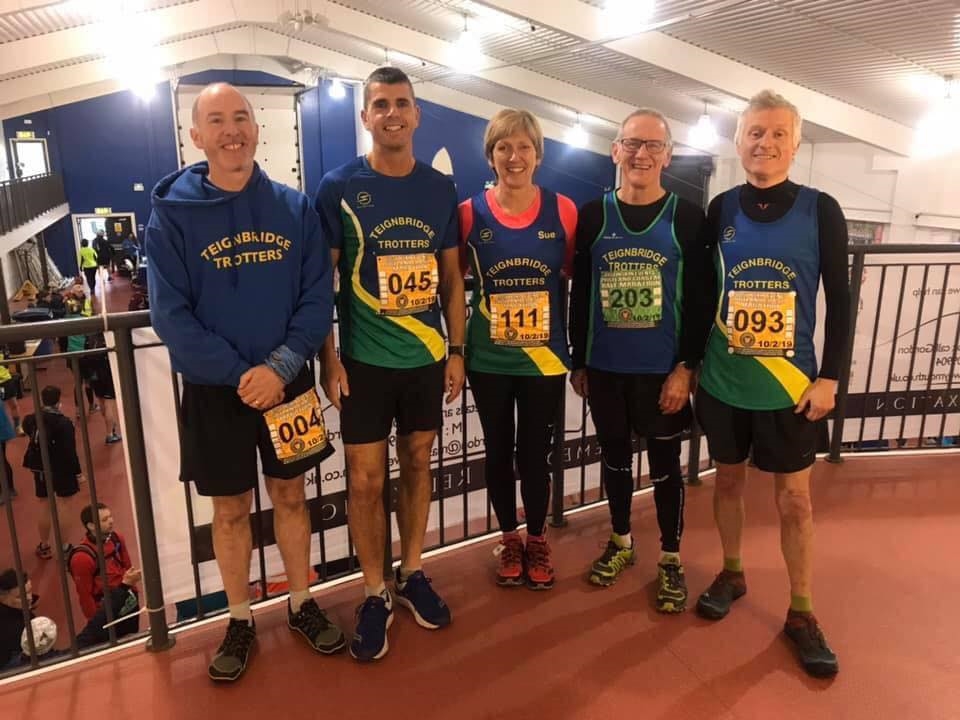 Don't they look smart in the new Trotters vests?? 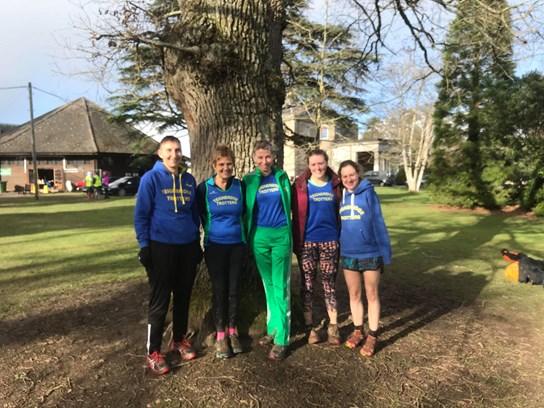 On a busy day of racing, the 5th round of the Charles Stanley Westward Cross Country League took place at Stover School, in Newton Abbot on Sunday.

It was an all-female showing for a race that is always well organised and popular with local runners. There were some slight alterations to the course from past years, but helped the runners navigate around the course a little easier!! Recent heavy rain had left the top field very muddy, and by the time the ladies race started, previous races had churned the course up badly. There were a number of slips and trip casualties making headway slower than usual. The strong cool wind was also a big factor on the day.

The winner of the ladies race was Heidi Tregenza, running for Cornwall AC, in a time of 22:30. Our first Trotter home was Susanna Goffe in 28:33 to give her 40th position.

With one round to go, Wendy Goldthorp lies in 7th place overall in the FV45 competition with 456 points. In the FV60 category, Hylda Stewart and Teresa Holmes currently lie in 5yh & 6th positions respectively.

In the ladies team events, the Trotters lie in 17th position in the Senior Ladies category and 10th in the Vet Ladies.

Wendy celebrated her birthday earlier in the week, by bringing along a cake to share amongst her team mates. Wendy would like to thank all the supporters who turned up and cheer them on around the course. It was very much appreciated.

On Friday 8th February, Graydon Widdicombe and Chris McIntosh took part in the the Charles Darwin Day Marathon was held in Shrewsbury, the home town of the English naturalist, geologist and biologist. The event is organised to celebrate his birthday, which would have been on 12th February, and the medal on offer is a great one, designed with that in mind.


Brilliantly organised by How Hard Hard Can It Be Events, the event was held on a track with a 10k and Half Marathon also on offer.

On the morning of the race, weather conditions were good, with some light rain at the start. However, this soon stopped and remained dry throughout the rest of the race. Winds were gusty and affected the runners on one part of the track.

The events were chipped timed, so there was no need to worry about counting laps!!

The Exeter Half Marathon weekend took place this weekend.

These races are run along the footpaths and cycle tracks around the River Exe and the Exeter Canal, and provide an ideal opportunity for personal bests and for newcomers to compete in their first ever event. The course is flat and is traffic free.

There were 297 finishers. There were no Trotter entries on the Sunday.