The popular Ivybridge 10K took place on Saturday 6th May in still and humid conditions and the turn out was a massive 762 finishers.  The route had a slight headwind for the return leg, but nonetheless there were some great performances by Trotters.

Sam Riches led the Trotters out in the first mile of the race and knocked over 3mins off of his PB, with a time of 40:42, which he is delighted with especially as his hamstring tightened up abit before the finish.

Emma Ray tackled her second 10K since starting running last August, and this was her first event with a couple of hills thrown in.  Emma is hoping to do many more events in the future, and was pleased with her time of 55:47.

Also, Sarah Pike was happy with her time of 47:50.  This wasn’t a PB for Sarah, but it secured her the second V40 prize at the event.

Finally, Roger Easterbrook, also nursing a dodgy hamstring, picked up a prize with his brilliant time of 37:40 winning 2nd MV40.

Full Trotter results are below: 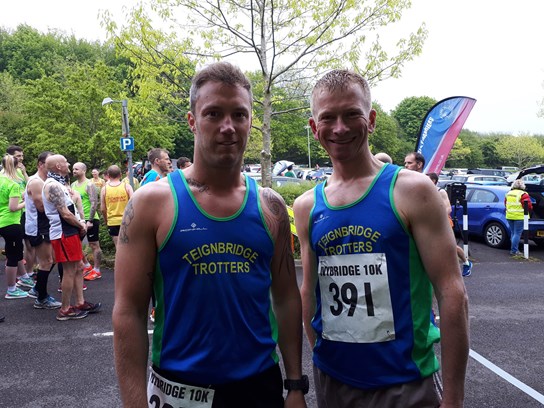 Jim and Emma Donovan headed to the east of Devon on Sunday 7 May for the Beer Blazer 10k.

This multi-terrain race is run over Grizzly territory making it pretty brutal - but equally beautiful - in many places. Private land is opened up so runners can cover fields and tracks alongside open common, under-cliffs and cliff tops. A punishing element of the route includes a jaunt along Branscombe's pebbly beach towards Beer Head before an energy sapping ascent of the famously known 'Stairway to Heaven' takes runners from sea-level up to the seaward facing Jurassic cliffs topping out at the 135m contour.

It is a race where technical ability and some running nouse is required. Keeping an even pace for the first half helps deal with the tougher business end where shingle, pebbles, steep paths and rutted fields can drain energy reserves very quickly. The compensation is that it offers huge amounts of self-satisfaction on completion and provides astonishing views of rolling countryside, the briny blue deep and chalky pinnacles that cuddle this part of the coastline.

The Blazer raises money for the village primary school and bases itself at popular railway and garden tourist attraction Pecorama. The 10k is complemented by a 5k and a fun run making it a great day out for runners of all abilities and their families. Food, drink (including cakes and burgers) are plentiful and finishers are treated to prizes of sweets and flapjack.

Three Trotters travelled to Crediton on Sunday 7th May, to take part in the Crediton Crunch.

The event was well organised and marshalled, and the course was a challenging one. It was mainly off-road, with some single file sections, tough rutted farmland terrain and two steep hills strategically placed in the second half of the race. Conditions were dry and warm though, so runners were lucky in that regard, and the course measured approximately 5.6-miles.

Two Trotters training for the Dartmoor Discovery did the Shakespeare Marathon on Sunday 7th May. The event is a two-lap race with one very steady hill – nothing like Dartmoor! But conditions were good and Travis Wood did 3:57 whist Kurt Read did 3:24. 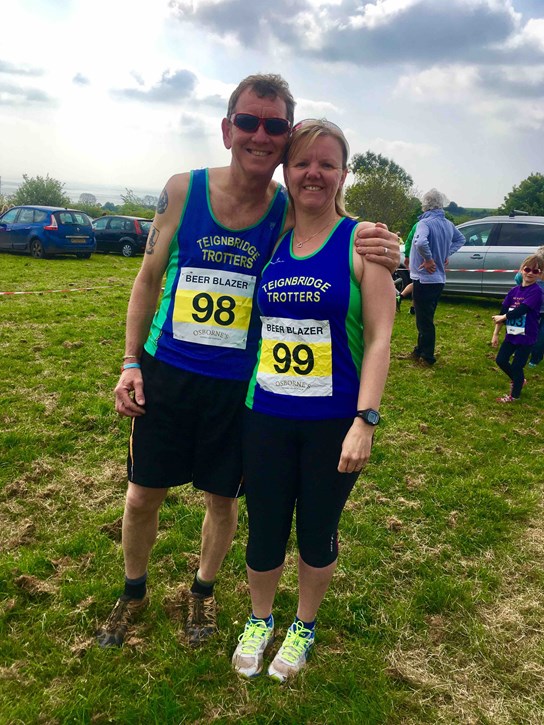 Jim and Emma at Beer Blazer

Tracey Jolly took part in a weekend of races organised by White Star Running. Tracey did the Dark Ox 10k on Saturday night followed by the Ox Half Marathon on Sunday.

The races took place over the West Wiltshire downs and along the ancient Ox Droves, starting and finishing in the beautiful Rushmore estate home of the Larmer Tree gardens.

The Dark Ox 10k was a night run that had a few steep hills, my first night race, and Tracey completed it in 1:08:53. The Ox half marathon was a tough, very hilly trail race with nearly 2000ft of elevation, which Tracey completed in 2:52:27

David Taylor represented GB in the 70-74 age group team, in the European Duathlon Championships, which took place on 30th April in Soria, Spain. Soria is a small city situated at an altitude of over 1000metres, approximately 200 miles from Madrid.

The run-bike-run event took place in appalling conditions (a yellow weather alert was issued) and wind speeds reached up to 48mph. Potted trees and bins were blown over, as well as small dogs! Rain also made the route hazardous and gusts of wind affected steering on the bike badly. David said that the combination of these conditions along with a hilly course made the race the toughest he has ever faced, both in duathlons and in normal running events. He was not alone in thinking it was tough, and times generally were much slower than normal for the distance, which was the standard of 10k run, bike 40k and 5k run. 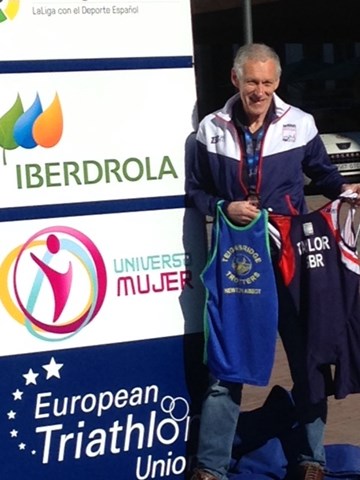 David Taylor with his Trotters and GB vest 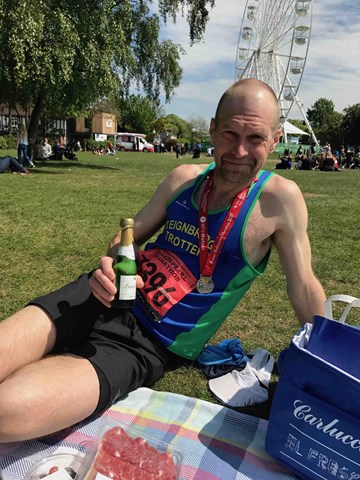 David said he was disappointed with his 3:03 finishing time, but was pleased to find that he had finished second in his age group, so the podium place and silver medal made it all worthwhile.

Richard Keatley finished a marathon somewhere in the country in an unspecified time on what was apparently a hilly course. Well done to Richard....