On Sunday 13th October, Cornwall’s Premier running event took place. The Eden Half and Marathon races took place for the 10th time, around the clay pits in St Austell. These multi-terrain events are hilly but this leads to some dramatic views of the Cornish landscape. The marathon course was run on 70% trails, paths and private roads, and the Half on 60% trails.

Organised by St Austell running Club, the runners are invited to a pre-event pasta party with elite Kenyan marathon runner, Benard Rotich. There were aid stations every 3 miles and isotronic stations every 7 miles.

The Half Marathon distance was also a Club Championship race.

Six Trotters took on the gruelling marathon in testing wet and very muddy conditions. Roger Hayes finished in 25th place, in a great time of 3:39:16. This also gained him 2nd in the MV50 age category competition.

Jamie Stephenson won the race in a great time of 2:53:50. Each finisher was treated with a free pint & pasty!! 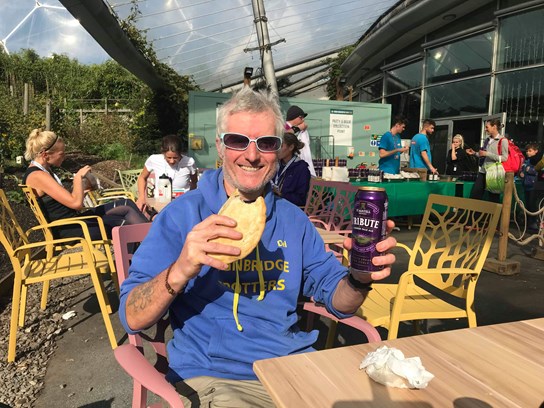 Our own Kipchoge, Derek, enjoying his pint and pasty having run the Marathon

In the Half marathon, Ian Langler ran superbly, to finish in 17th place in a time of 1:30:26 and Ian also finished 2nd in the MV40 age category.

Our Ladies team also combined well to finish in the first three,

Bernard Rotich, not surprisingly, won the event in a great time of 1:09. 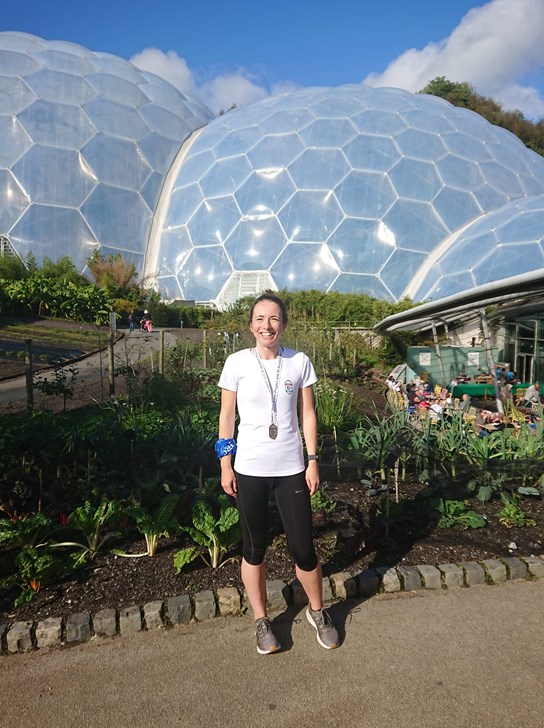 Debbie Proctor at the Eden Projects 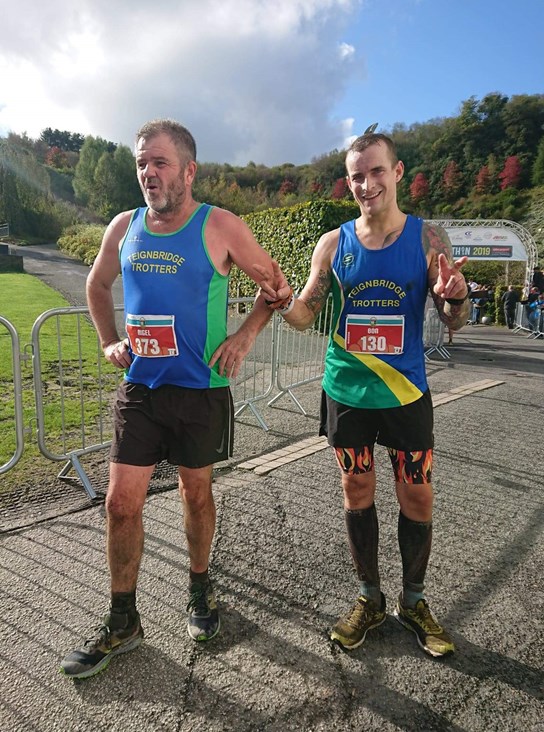 The Great West Run, a half marathon, took place on Sunday in Exeter.

The course took the runners through the heart of Exeter, before passing through quiet country roads, giving terrific views of the city on their way to Stoke Cannon, before making their way back to a great finish at the Exeter Arena Athletics Stadium.

There were hundreds of supporters lining the route with live music along the way. The wet weather forecast cleared away before the start luckily.

Jason Trevenen was the first Trotter home, clocking a time of 1:37:03 to finish in 187th position.

Emma Ray goes from strength to strength, as she set a new PB for the half marathon. Emma was our leading female finisher, crossing the line in 1:50:58, to finish 569th.

This was also Simon Durants first race as a Trotter, and his first half marathon!! Alexis Marsh set a new PB by over 6 minutes, having not run over this distance for six years! Kat Ashburton-Scott also set a new PB.

Tom Merson, representing Exmouth Harriers, took the honours, winning in a great time of 1:07:03. There were 1925 finishers. 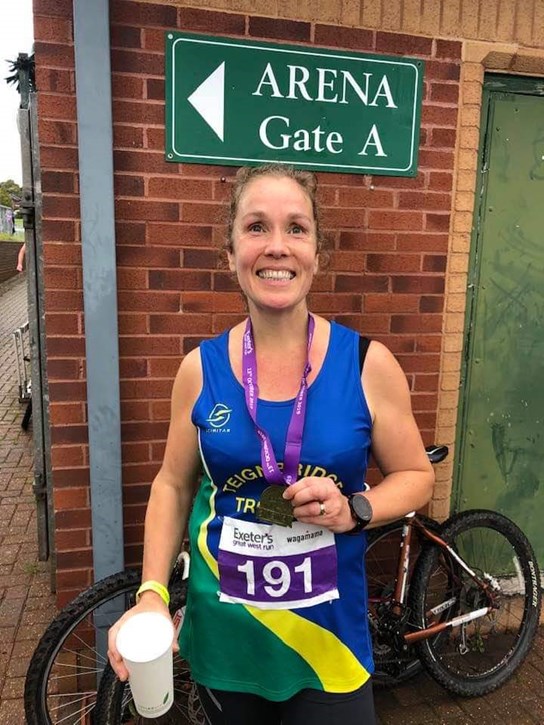 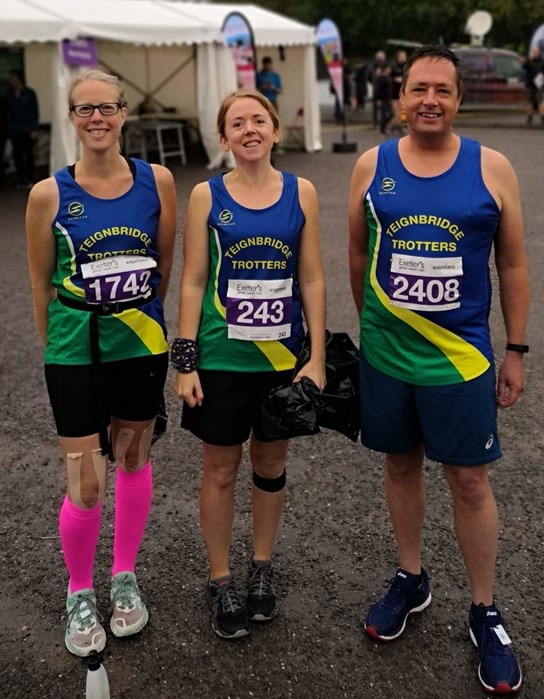 Alexis, Kat and Simon competing at The Great West Run 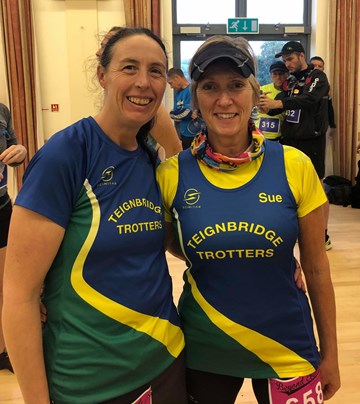 Lucy Locket and Cider Sue at the Burton Bradstock Marathon

Sue Tremlett and Lucy Evans travelled to Dorset to take part in 4th year of The Burton Bradstock Marathon.

The venue lies 2 miles southeast of Bridport. There were races at varying distances on offer, a 5k, 10k and half marathon.

The Marathon runners followed quiet country roads, passing through some picturesque villages on route, including Litton Cheney. The course was two laps of the half marathon route.

The elevation was undulating, so included some nice downhill stretches.

Our ladies both ran well, and even found time to help and motivate some other runners along the route. Lucy finished just ahead of Sue, finishing in 26th & 27th positions respectively. Lucy’s time was 5:06:08 and Sue’s 5:06:11.

On Saturday 12th October, Gavin Forbes took part in the 50K ‘A Race with No Witty Name’.

The race start was at the National Trust in Tisbury, nestled in the heart of the Nadder Valley and smack bang in the centre of the Cranborne Chase and West Wiltshire Downs AONB. The route will took the runners through some of the most truly stunning and visually stimulating countryside that the South West has to offer. The course went around the Fonthill Estate and the Vale of Wardour for approximately 32.27 miles, and completing an overall elevation of approximately 3600 ft. Eventually, the runners ended up exactly right back where they started in Tisbury.

There were 4 fully stocked aid stations, one at the start and a further three on the route itself. The cut off time for competing the route was 9 hours! The course was marked with tape and signage.

Gavin climbed 3,800 feet, and ran through lots of muddy stretches of water. Gavin completed the distance in 7:13:52, and welcomed the warming veggie stew at the finish. 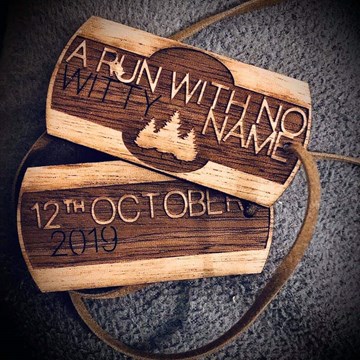 A Race With No Witty Name eco prize

Jim Donovan, Ella and Ian Bowles tackled the 20km multi-terrain race which is packed full of hills and more than 420m of climb. As the name suggests it starts and finishes in the Mendip Hills close to Cheddar Gorge, at a small hamlet called Charterhouse.

The route is within an Area of Outstanding Natural Beauty (AONB) and takes in some of the best scenery the area has to offer. Runners chart a path past Roman forts, underground rivers, nature reserves, open moorland, an Iron Age fort, woodland and prehistoric tumuli.
Technically challenging, it more than lived up to its name with runners needing to muddle their way through mud, streams and bogs.

All three Trotters completed the race, putting in good performances. Typically, the British weather played its part too, making timekeeping duties challenging and has meant that the results have yet to be published. 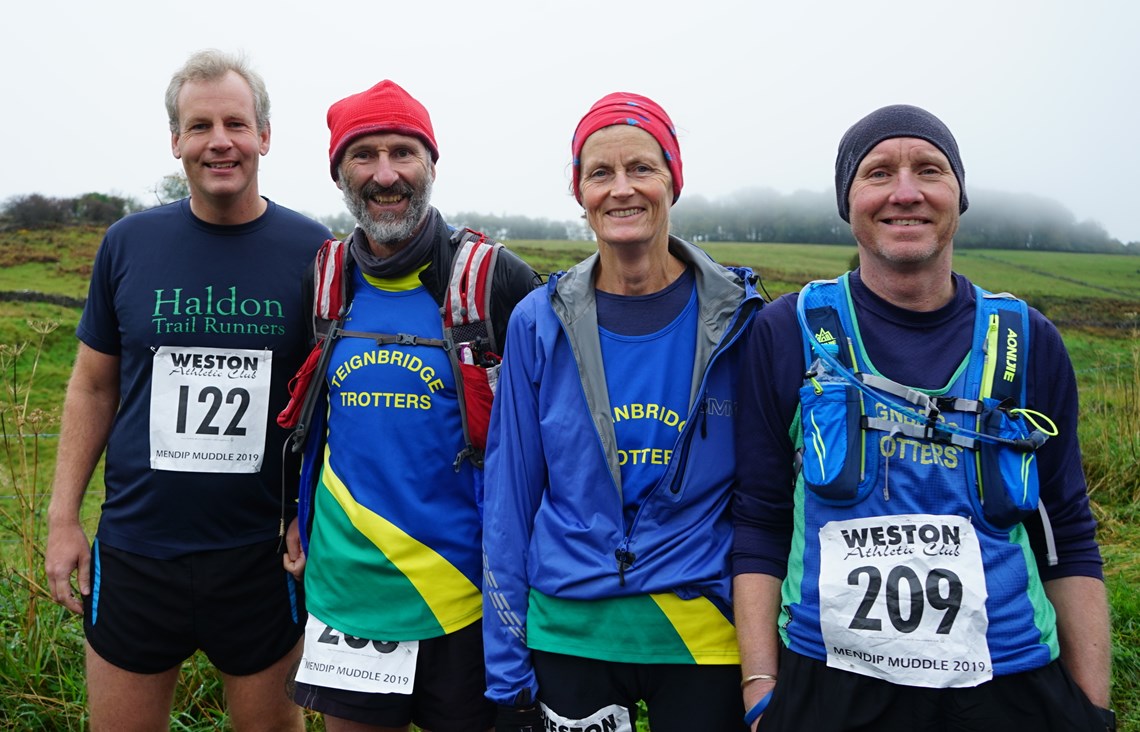 Two pensioners from Dartmoor have just completed an amazing run across the north of the country following Alfred Wainwright’s Coast to Coast Footpath from St Bees on the Cumbrian coast to Robin Hood’s Bay on the North Yorkshire coast line, a distance of 196 miles with a total ascent of about 28,000 feet.

Mike Peace from Lustleigh, who is 69, and Bob Small from North Bovey, who is 71, are both accomplished athletes; Mike is one of only 10 people to have run every one of the 39 London Marathons and Bob has just competed for England against the Celtic Countries in a half marathon in his age group of 70-74.

Bob, who has walked the Footpath a couple of times, had posed himself the question as to whether it is more tiring to walk the distance or to run it, so Mike and Bob set out to try and answer that question by running the same distance per day that they might normally walk - they were not trying to break any records other than, perhaps, being the oldest pair to do it with a joint age of 140! In 16 days they covered the ground by doing an average of half a marathon a day. Whilst challenging themselves to the task, they also were raising funds for Rowcroft Hospice in Torquay.

Mike and Bob were very ably supported by Bob’s wife Tracy and their black Labrador Lola in a camper van, providing dry, warm clothing at the finish of each day’s run with tea, soup or cold drinks. 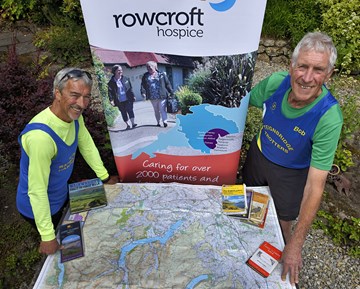 Its all in the planning!! 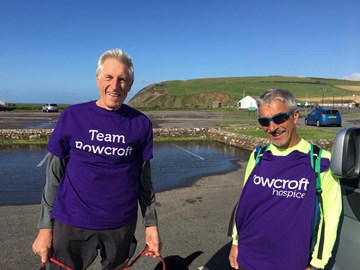 Bob and Mike take in the scenery 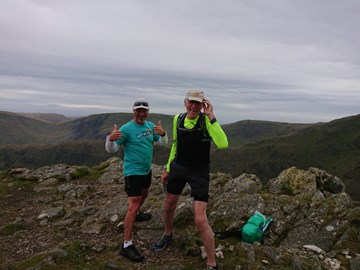 Hold onto your hat Bob!

The Footpath covered every kind of terrain from the Lakeland fells and mountains to the flat, rural countryside of the Vale of Mobray, then the Pennines and the North York Moors. Other than snow and ice, they encountered all types of weather conditions but the weather was, in general, very kind to them with a number of very hot, sunny days with temperatures in excess of 20 degrees C. – in fact Tracy, Mike and Lola all went swimming in rivers in Richmond and Keld! Their second day from Ennerdale Bridge to Rosthwaite was their worst day with high winds and driving rain, as they crossed the open fells at about 2000 ft. In Kirkby, Stephen was met by their friend Lionel Holmes with whom they enjoyed an Indian meal!

Bob said “This was quite a tough challenge but, generally, we had very good weather which made a huge difference. We were really delighted with the support we received along the way for Rowcroft Hospice and how generous people were. Oh, and one last thing - it’s more tiring to run the Footpath than it is to walk it -and that’s official!”

Mike said “Challenging it certainly was. Some terrain was too steep or unstable to run (rocks and peat bogs) whilst other surfaces were pleasantly forgiving. The weather was a blessing (on the whole); the people we met were amazing (from all over the world); the sights and views were incredible AND on balance it was marginally better to run it (basically because we had longer rests, and shorter pains).

Alison Upton, Community and Corporate Fundraising Manager from Rowcroft Hospice said “We are totally in awe of Mike and Bob - what an incredible achievement! Each year Rowcroft helps over 2,000 people with life limiting conditions and we rely upon our local community to help fund this. The money that Bob and Mike have raised will make a real difference enabling families to make the most of every moment.”

We, and more importantly, Rowcroft Hospice are all very, very grateful to those who have donated to the cause. To date, with on-line payments, tax relief and donations to the Rowcroft tins, we’re well on the way to our target of £2,500.00 but it’s still not too late to contribute by going to the Just Giving website page https://www.justgiving.com/fundraising/Bob-Small-Mike-Peace

Graydon Widdicombe travelled to the Sofia Marathon in Bulgaria, which took place on Sunday 13th October.


Unlike the weather conditions in Devon, conditions in Sofia were warm and sunny with no rain, which made for decent running conditions, if a little warm for some.

This was a very affordable marathon too, priced at around £25 and that included a shirt, medal and a decent sports bag.

The event was well organised by main sponsors including Whizz Air and Asics, and as such it made logistics very easy for the runners and spectators, with the start and finish being at the same place in the centre of Sofia on this two lap flat course.

The course took place on closed roads, and included a loop of the main sights in the city before a long, straight section out towards the airport and back. One lap was enough for the Half runners (there was also a 10k and fun run), but the marathon runners had to go around again as the temperature climbed to 25 C.

Graydon didn’t have a great race in terms of his finish time, but loved the city itself. Graydon’s finish time was 3:55:58. 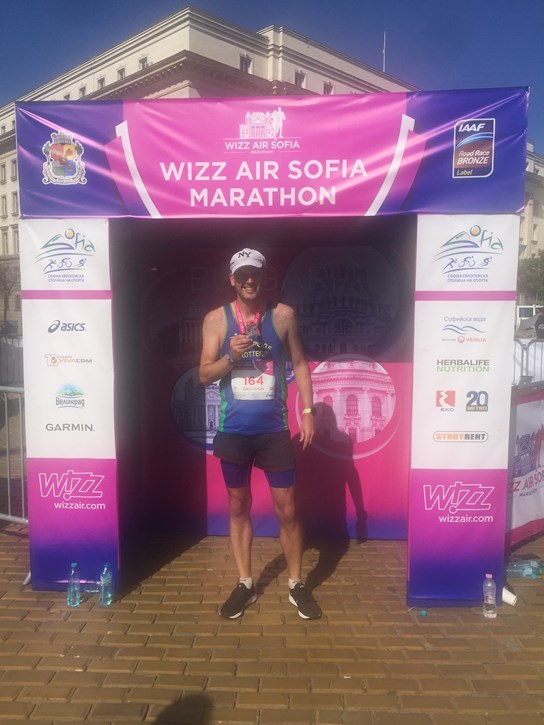