Trotters travel to London for the 36th running of the marathon 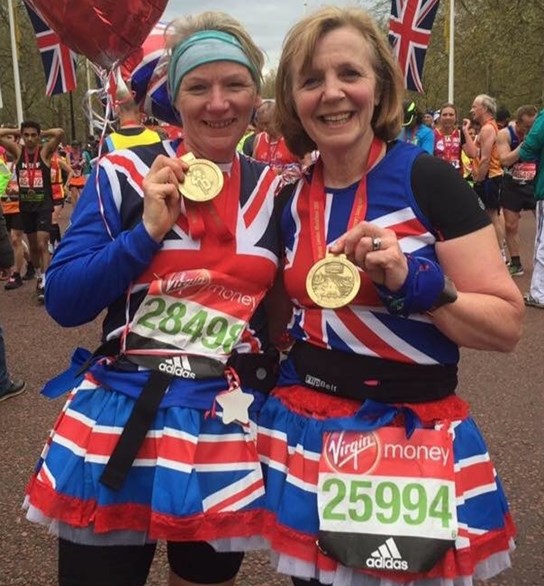 Sally and her friend with their medals

25 Teignbridge Trotters travelled to London, to take part in the 36th running of this fantastic event. Toeing the same start line as numerous elites and on a day when the men’s world record was narrowly missed by 7 seconds, there were several Trotters taking part in their first marathon whilst some others had been training hard for a PB or a particular time milestone. Those who weren’t in London were tracking their teammates on the race website or facebook, and looking out for members of the club on the TV (and Sally even managed to get interviewed by Denise Lewis!).

Helen Anthony has been putting in some fantastic training and it paid off on the day, with a big PB and going under the challenging 3-hour milestone for the first time. As well it being a big personal goal for Helen, it is also the first time that any female Trotter has gone under 3 hours so her name goes against yet another line in the club’s record books.

There were some fantastic performances from other Trotters who also obtained PBs over this iconic distance, showing that all their training has been worth it. They included Geoff Davey (another sub-3 hour marathon, knocking 3 minutes off his time), James Ayling (nearly 20 minutes off his PB), Allen Taylor (a 4 min PB), Mel Dunn, Tim Hartley, Russ Wheeler and Mandy Wheeler.

Meanwhile, Travis Wood travelled up to Stratford-upon-Avon to compete in the Shakespeare Marathon as the only Trotter.

The race started in the town centre with a nice one mile loop, before heading out on a undulating two lap course through the surrounding villages and finishing on the flat, gravel packed, greenway bridle path.

Weather conditions started with a rather fresh blue-skied morning, later turning overcast with a few specks of rain. Travis finished in a time of 3.36.58.

Thanks to Travis for his contribution about the Shakespeare Marathon.