Sally Ingledew and Craig Churchill took part in the Plymouth 10K on Sunday 9th October, which is well organised and ran on an out-and-back closed road course. It’s a big event, as there were 2147 finishers, which helped create a great atmosphere.

Craig Churchill ran well to finish in 43:42 for 161st position. Meanwhile, Sally – who is usually more accustomed to marathons and would say she isn’t a massive fan of the shorter distances – went and broke the club’s FV55 10K record! Sally managed a great time of 51:36, which also won her first FV55 at the race.

Pete Kirby was up in York to run the Yorkshire Marathon on Sunday 9th October. Running conditions were good for this well organised and very popular race.

After a break from racing since May, Pete was pleased to run the marathon in 3.56.49 - a time which qualifies as a Vet 65-69 Good for Age for the London Marathon.

David Taylor took part in the Oulton Park Standard Duathlon on October 2nd. The event is a qualifier for the Duathlon Age Group European Championship, which is being held in Spain in 2017.

The race was held on a fast, undulating, traffic free racetrack, and included a banked hairpin bend. David completed the course (run 8.6km, bike 38.76km, run 4.30km) in 2:27:25, finishing first in his age group. This has qualified David for the GB Age Group duathlon team (70-74 category) for the championship. 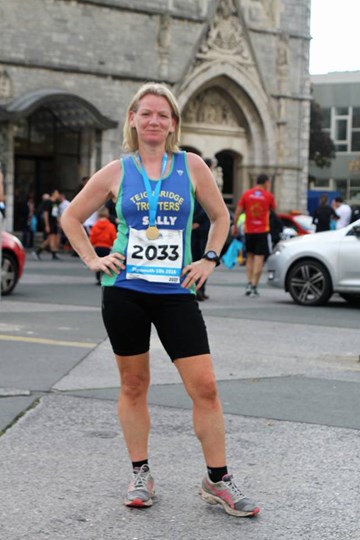 Sally after the Plymouth 10K 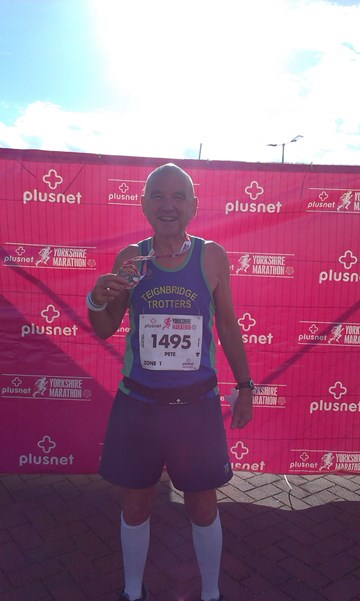 Jim Donovan and Emma Pearcy represented the Royal Blues at the Lanhydrock Run on Saturday October 8. The 10-mile race is organised by the National Trust and held entirely within the 1,000-acre estate. The entry fee is ploughed back into maintaining the stunning Victorian country house, gardens and extensive grounds. The picturesque up-and-down course takes runners through parkland, ancient woodland and along paths next to the River Fowey. In a field of 190 competitors Jim finished 102nd in a time of 1:35.49 and Emma clocked 1:46.05 for 139th place. All runners were rewarded with a goodie bag filled with sweets, treats and a commemorative mug.

Thanks for all the contributions.

Please note that next week (15/16 October) Keith Anderson will be writing the report, so please send him any race details. 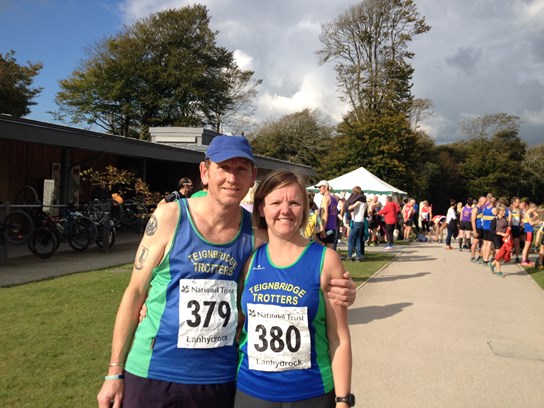