The Trotters have been out in force again this weekend, though not in the usual large numbers – more quality than quantity, no doubt.

First there was the club championship foray into fell-running at the Sticklepath Horseshoe Fell Run, a race of 9.6 miles with 1700 ft of ascent over high moor land crossing rough unmarked terrain. Trotters taking part were Eleanor Taylor, Derek Skinner, Jim Donovan and Roger Easterbrook. Over to you Roger Easterbrook:

A hardy bunch of Trotters assembled in drizzle in the shadow of Dartmoor looming above the historic and picturesque village of Sticklepath, near Okehampton on Saturday. JIm Donovan, Derek Skinner, Eleanor Taylor and myself, Roger Easterbrook, were amongst forty foolish competitors who gathered in a field near the old Foundry ready for minimum 9.6 miles and 1700ft of ascent.

With competitors from across the South West and much further afield, there was a bit of limbering up before we set off, shortly crossing a river footbridge and then just like Lustleigh Show, weaving steeply up hill on a bridlepath for a while as we entered the open moor.

I managed to go the wrong way, and then fall on my face, much to the amusement of a veteran Axe Valley runner who eased past me. Heading west and with some flattish terrain we headed toward a small stream crossing that everyone took, except Eleanor with superior intelligence who spotted a dry crossing. After this Jim explained a fellow competitor led him the wrong way leading to some uphill gorse and bracken tactics.

The field had broken up, it was time for plenty more uphill, and boulder weaving as we reached Belstone Tor, before partly following old tracks and then dodgy Elephant Grass & Tussocks as we reached a steep quick river valley called Steeperton Gorge. I was furious with the guy i was following. We should have taken a longer easier route but I had no idea where we were going.

At the summit it was time to head in the direction of home, a kilometre shallow descent through more tussocks, ankle busting territory, before an easier path and ridge run north to Cosdon Hill, our last high point with great views. All down from here (3k), swerving a few wild ponies, avoiding the dips, before we hit the steep descent (which really hurt the thighs) back to the finish.

A reception of flapjack, bananas and cider was much appreciated. We later all decamped a few yards to the picturesque Devonshire Inn garden, to savour such delights as Muck’n’Straw beer, with free dog biscuits on the bar. It was tough, but we all survived, and the sun came out mid-race to make it a beautiful day.

Further afield, four trotters ran the Salisbury 54321 marathon distance race in very hot conditions. The Salisbury 5-4-3-2-1 event is suited to all the family, with a choice of distances from 5km to the more demanding 42k/Marathon, or even a 50k Ultra Marathon. The routes were over footpaths, bridle ways and quiet country roads in the Salisbury Wessex area. Trotter participants in the gruelling 42K/marathon were Sharon 'Fizz' Bowman, Paul Sharples, Kris Ward and club chairman Roger Hayes.Salisbury 54321. Trotters' times, out of 292 finishers, Roger Hayes was first Trotter home and 3rd overall in 3.30.52; Kris Ward, 3.58.04, Richard Keatley, 5.58.15 and Sharon Bowman and Paul Sharples 6.41.09.

Meanwhile, not wishing to be outdone by other marathon distance performances, Sally Ingledew and Lance 'Skippy' Mason were in Northern Ireland The Quadrathon courses are 4 separate routes over 104.8 mile of coastal roads around Inishowen. The routes are a mass of beautiful scenery and dotted with historical landmarks and small friendly towns and villages. 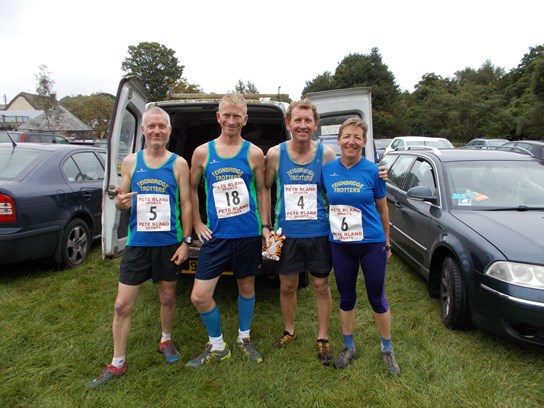 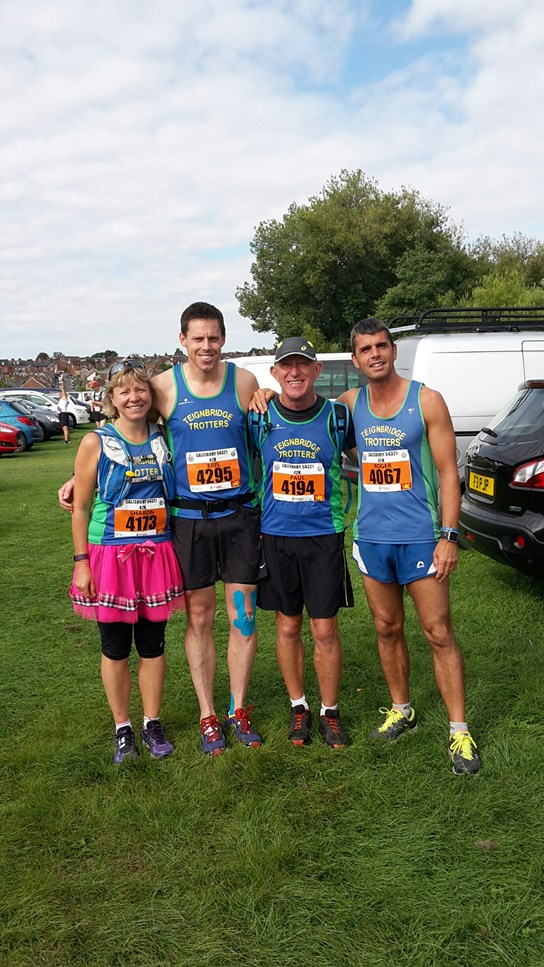