Teignbridge Trotters staged their last race of the year – The SibelcoTempler Ten on Sunday 4th November. CLIC Sargent are the chosen charity this year. The race is a multi-terrain 10-mile course starting and finishing in the wonderful grounds of Stover School, Newton Abbot. The Templer Ten race has a lot of history surrounding it.

Stover School was built as a Georgian Mansion. It was commissioned by James Templer (1722-1782) and completed in 1777. Three generations of the Templer family held the estate until 1829 when it was purchased by the XI Duke of Somerset, remaining with his family until after WW1”.

The Temper Way is today an 18-mile stretch that runs between Haytor in Dartmoor and Teignmouth. Both families pioneered the extraction and export of Ball Clay and Datmoor granite on a commercial scale, using the quarries and transport system created by the Templers. The granite was removed from Haytor quarry and using a granite tramway moved down to the Stover canal and onto the sea. The surviving evidence of the industrial past can be found along the route of the Templer Way.

The course is 90% off road, making the route a difficult challenge especially at this time of the year. Due to the torrential rain of late, parts of the course were flooded and the river

crossing was omitted due to the banks eroding! It was decided to shorten the length of the race to avoid these areas. Many local runners target this race due to the toughness and

competitiveness that the race supplies. Chris McIntosh, in his second year as the race director, made sure all the behind the scene activities were put in place, and with the help of Chief

Marshal, Gary Caunter. A special mention must go to Nathan Elphick for the tremendous work he does behind the scenes, including the course set up. Also thanks must go to the

enthusiastic back room staff, including the time keepers, commentary team, caterers, registration officials and the many Trotters lending their support around the course. Chris felt that all

the effort was well worth all the hard work, having been given lots of positive feedback from the competitors. 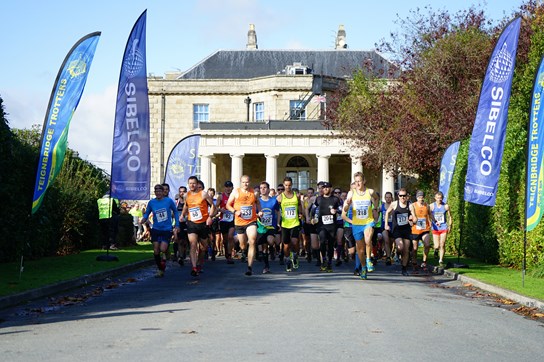 The start of The Sibelco Templer Ten 2019

To start off proceeding a 1-mile fun run for the kids took place, making it a great family event. The weather conditions were sunny with blue skies overhead. 92 children gleefully set off on their way. The winner was Tom Stoppard, winning in a fantastic time of 5:43!! The Teignbridge Trotter children all ran very well. Bethany Blackmore finished in 13th place, clocking a time of 00:7:22.

Possibly the new talents of the future?? Well done to all who took part. 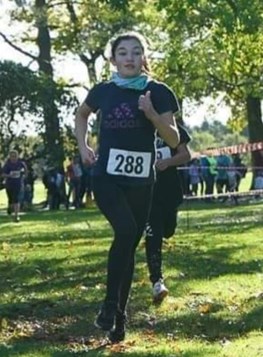 Beth Blackmore sprints to the line in the Fun Run 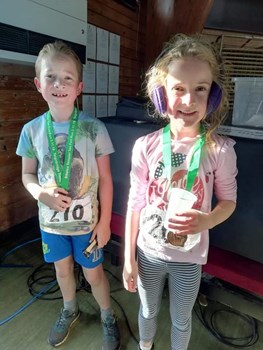 Chloe and Toby Langler with their Fun Run medals 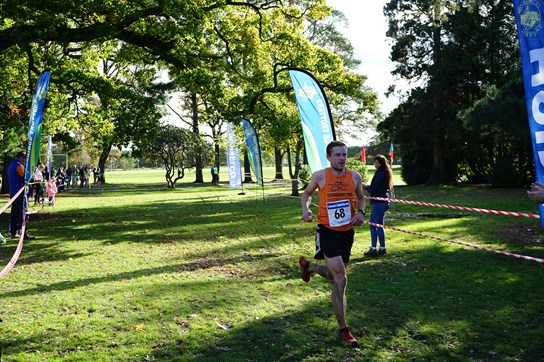 Lee Turner, about to become the Templer Ten 2019 champion

Lucy McCallister was the first female finisher, crossing the line in 9th place overall, in a great time of 00:52:16.

Roger Easterbrook ran another fine race for the home Club, despite being hampered with a back and hamstring niggles. Roger finished in 4th place, clocking a great time of 00:51:02. This performance also meant he finished 2nd in the MV45 age category.

All the Trotters ran well, on a very demanding and testing course. 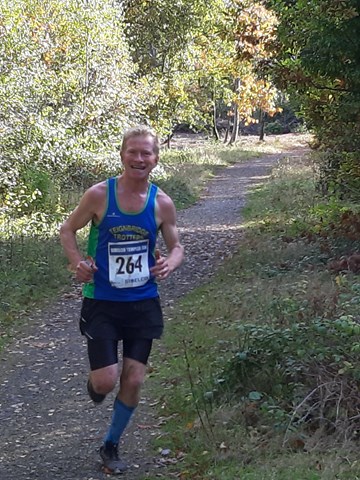 Leading Trotter, Roger Easterbrook on his way to 4th place at Stover 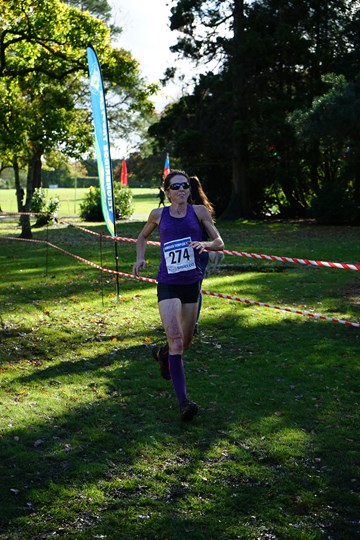 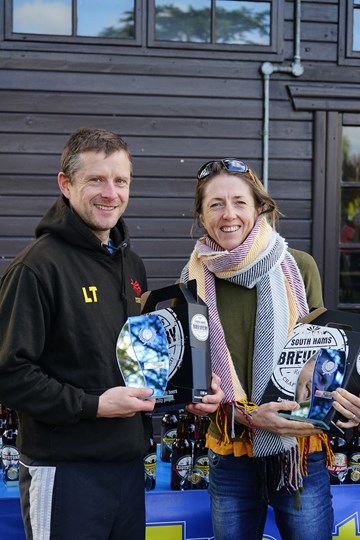 Lee and Lucy with their Templer Ten winners trophies

A trio of Trotters travelled to North Devon on Sunday, to take part in the Bideford 10 miler.

The course start and finish was close to the Bideford Amateur Athletic Club clubhouse, with magnificent views of the Taw & Torridge estuaries. The course headed out along roads and returned along the Tarka Trail. There were some large puddles to negotiate along the moderately flat course, with three small inclines to tackle.

Bob Small was the star performer, having set a new Club record in the 70+ category. Bob beat Graham Bakers time, set at Cabbage Patch, Twickenham, in 2011. The new record clipped 13 seconds off the previous best. Bob’s time was 1:17:47, good enough to win the MV70 age category award and 197th overall. It was also a 00:2:13 personal best. All in all, a very successful race.

Lucy Payne also ran particularly well, to finish runner up in the FV65 age category competition. Lucy clocked a time of 1:33:36 to finish in 483rd position. 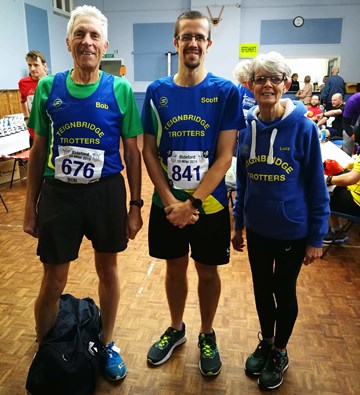 The Cornwall Marathon was held on Sunday 3rd November. Four Teignbridge Trotters crossed the Tamar Bridge on their way to race headquarters at Pensilva.

This marathon is Cornwall’s only all road race, and began in 1984, originally starting from Saltash, following the A38 & A390 to Lostwithiel. The race idea came about when a wager was struck between two organisers, John Foster and Stephen Henderson, on who was the fastest!! 27 runners took part, and the winning time was 2:29:15, a time that make race winners to this day envious. A year later, 78 runners took part, before The East Cornwall Harriers became the official organisers.

From the start at Millenium House, Pensilva, there followed a scenic circular, out and back route, which took the runners through Draynes Valley. Then onto “Poldark” country on Bodmin Moor, past King Arthurs legendary Dozmory Pool and onto Du Maurier’s Jamaica Inn at Bolventor. At this point, the runners ran back along Fowey Valley, taking in a nasty climb at miles 24- 25.

Unfortunately, due to the very wet and windy conditions on race day, the course was changed to avoid some flooded areas.

Paul Sharples led our quartet home, clocking an impressive time of 4:02:43 to finish 130th overall and 2nd in the MV60-64 age category. 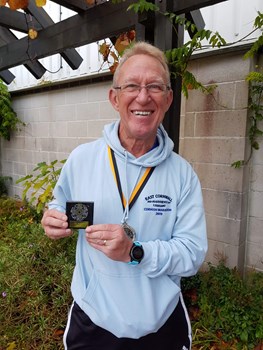 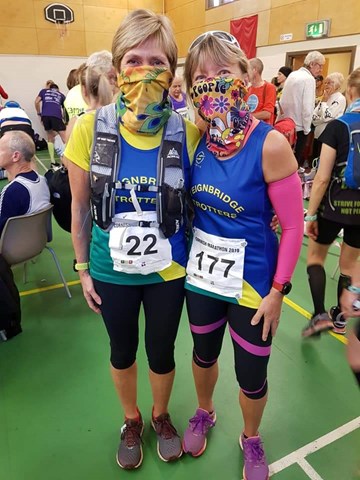 Sue and Sharon messin about down in Cornwall 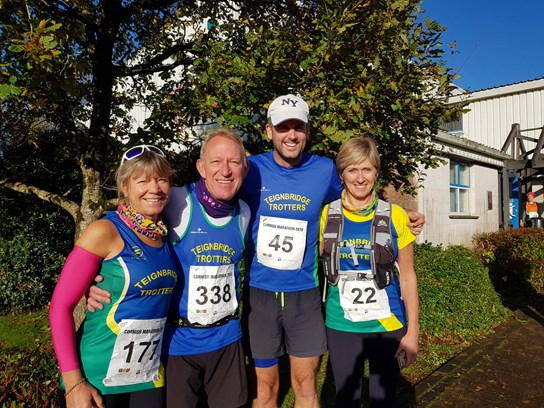 Group photo before The Cornwall Marathon

On Saturday 2nd November, Karen O’Brien, the Club’s serial racer, took part in the Dark Valley Half marathon. There was also a 10K race on offer to.

An event run by WSR, was held at Moor Valley Park, situated near Ringwood. Race start time was 17:30, so head torches were mandatory. The runners followed forestry trails on a two loop course around the park, having to watch out for fallen branches and other debris along the way.

The weather conditions at race time improved significantly, as the rain and wind had past by. 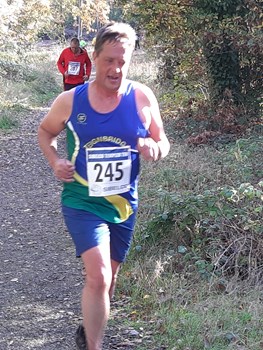 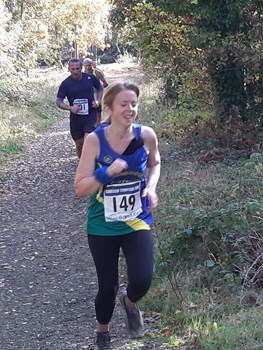 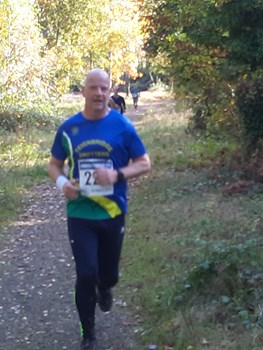 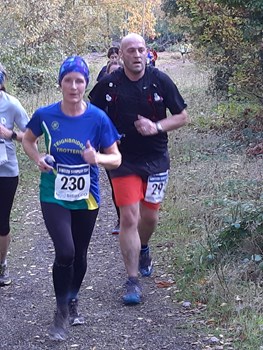 Julia Street in the pack at Templer Ten