Roger Hayes and Graydon Widdicombe represented the Trotters at The Worcester Marathon on Sunday 16th May. The race organisers were Tempo Events & proceeds went to St Richards Hospice. This was the 10th running of the marathon.

Graydon travelled north up the M5 on the morning of the race, enduring heavy downpours. Roger travelled first class in his motor home, arriving on Saturday.

The runners set off in groups of 6, according to their predicted finish time. Graydon was in the 3:20 group (which ended up being very optimistic on the day!!), and Roger was in the 3:30 group. Although runners were in groups of 6, they actually started individually so Graydon ran the entire race on his own apart from overtaking a few half marathon runners on the 2nd loop. The weather stayed dry throughout the race, but there were a couple of floods which could not be avoided!

The race started and ended outside Worcester Warriors rugby ground, Sixways, and took the runners out into the country and up through the undulating rural lanes. “Undulating” was probably a good description, as the route profile suggested. There were very few flat sections, therefore providing the runners with a very good test of endurance. 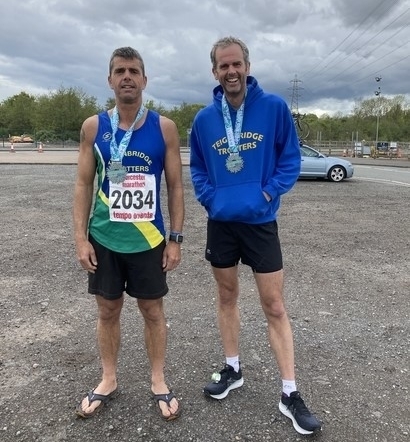 Roger and Graydon in the car park at Sixways

Roger headed our Club duo, finishing in a great time of 03:26:39 to claim 18th position out of the 132 marathon finishers. Roger was delighted with his time on this road surface, having competed in a couple of trail marathons of late.

Graydon was disappointed with 03:48:04 and 45th place, but this was a prep race for The Dartmoor Discovery, a 32 mile Ultra starting & finishing at Princetown on June 5th.