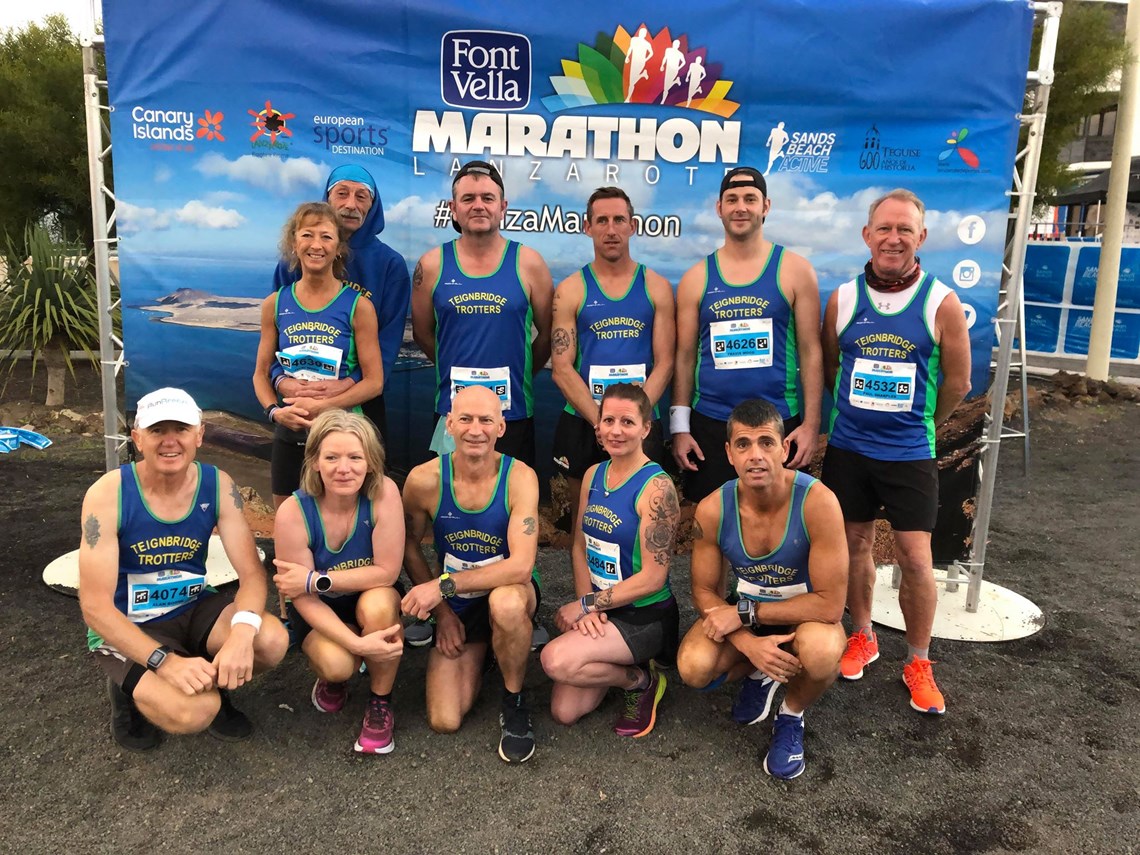 The Trotters annual foreign marathon trip saw them descend on Lanzarote this year. After the cold weather of Munich last year, it was decided a bit of winter sunshine was in order for 2018. And true to form race day certainly didn’t disappoint.

There was a choice of three distances, the marathon, half marathon and 10K. The race entry for all three races has increased every year for the past seven years. Seventeen Trotters took part, with many more cheering on from the side lines. The marathon was an out and back course, starting from Costa Teguise and following the coastline to Puerto Del Carmen, before returning back to Teguise. The marathon started at 8am allowing for the runners to get quite a few miles under their belts before the temperature really started to rise.

The half marathon started in Puerto Del Carmen at 10.30am and the 10K started in Arrecife at midday. Runners had the option of being bused out to their starts before following the same route as the marathon back to Teguise.

The course was surprisingly undulating, with many of the hills coming towards the end of the race. However, the biggest challenge was the headwind that all the runners had to battle with as they headed back to Teguise. This was particularly tough between 13 and 17 miles in the marathon as the route was quite exposed and adjacent to the airport.

Despite the testing conditions there were some notable performances. Christian Robinson set a new PB when he finished in a superb time of 3.26.25. Alan Boone won the 1st MV60 category in a time of 3.29.09 and Sarah Pike, competing in her first marathon, ran very strongly to finish in a time of 3.55.46. The Trotters also won the 2nd team prize. This was awarded to the first seven runners of either sex from the club.

Showing true Trotter spirit, despite suffering from heavy colds, Stef, Paul and Jacki all managed to finish their respective races.

Club Chairman, Roger Hayes, was impressed with the organisation and the numerous drink stations out on the course. He said “Everyone ran really well today, the temperature hit 24 degrees and that wind was brutal in places. I was so pleased for Christian, he really deserved that PB. A special mention to our club captain, Lance Mason, who did a sterling job running with Christian and encouraging him up those last few climbs”. Plans are already afoot for next years foreign trip. 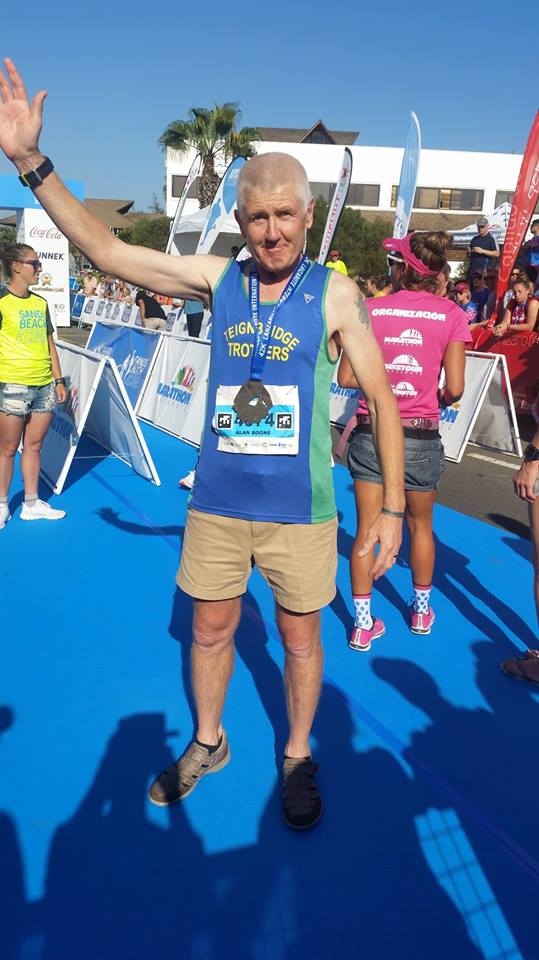 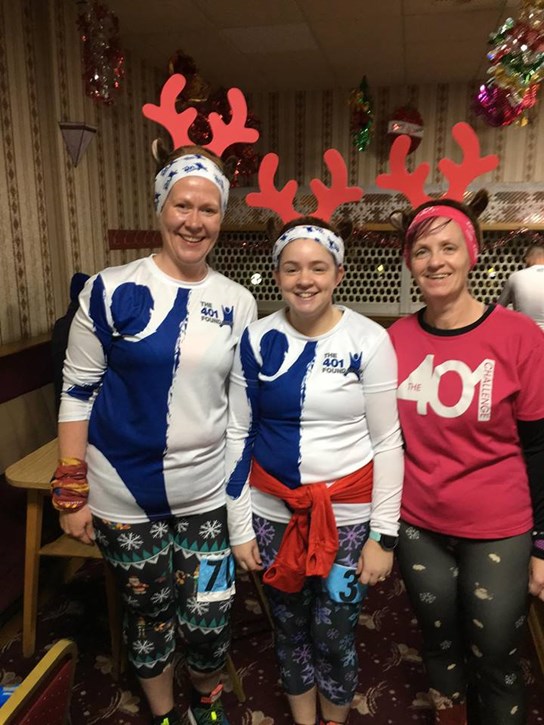 The Cockington Christmas Caper has been organised every year since 2004 by local Christian Charity, The Barnabas Sports Trust.

This years race will took place on Saturday 8th December 2018. Race HQ, start and finish are at Cockington Cricket Pavilion. The race is approximately 7 1/2 miles, in and around the beautiful Cockington Country Park. It is an off road race on trails, footpaths and cycle paths, the route is very hilly and often muddy. 234 runners took part this year with Melanie Dunn being the first Trotter to cross the finish line in 01:10:49 placing her 45th overall. Unfortunately it appears the results don't display all the Trotters which took part so below are the results of the listed club members:

Suzie Mills completed her 15th Marathon in 12 months this weekend - The Grim Up North Christmas Cracker Marathon. Finishing in 6 hours on the nose

When you've set yourself such an impressive challenge and got to the end it's only right that you get the last word...

"This year has been a journey in so many ways. It has been tough, mentally and physically but I have learnt so much about myself along the way. Today was tough, and I know the body is tired but so was the mind. All I could focus on was the finish line. The weather held off for most of the day, and after last week that was a relief. We did get drowned in the last 2 miles though as the heavens decided to open. But it’s done and I would thoroughly recommend It's Grim Up North Running events. Great organisation. Fab goody bag with beer and chocolate and I’m loving the medal. To the other 2 companies I have done most of this years marathons with White Star Running Group and Saxons, Vikings & Normans Marathons & Running Challenges Group thank you for putting on the awesome events that you do. This time 4 years ago I hadn’t taken my first running steps and to have completed 15 this year still amazes me. A huge thank you to all the Trotters for supporting me throughout the year - you truly are an amazing club! Now it’s time for a rest."

Well done Suzie! If you wish to donate towards Suzie's challenge there is still time - http://uk.virginmoneygiving.com/12marathons12months 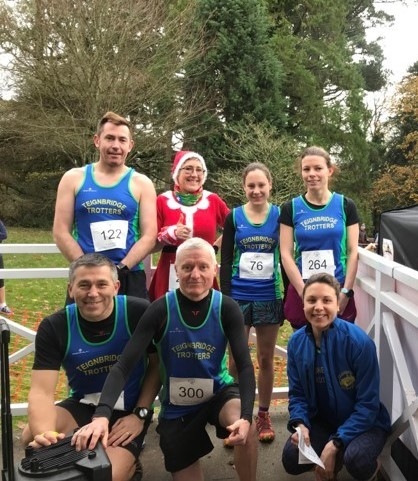