Trotters travel in search of races that escape coronavirus cancellations

On Sunday 15th, the Mad March Hare 10K took place, organised by The Plymouth Round Table. The charity event is a very popular race for local runners and was a good test of how the winter training has gone.

It was an early start for Susanne Westgate, Louise Gentry and James Saunders as they travelled down the A38 to Plymouth for a 9:00 am start time. The weather conditions were wet and windy before and during the race.

The start and finish was at the speedway track entrance, and the out and back course took the runners into the picturesque grounds of Saltram House. From here the undulating route ran parallel with the River Plym, before heading inland through woodland, up a very steep section at 2.5 miles. Having negotiated this lung busting test, the runners were rewarded by having to descend back down the same hill!!

Susanne ran a very encouraging race and is improving rapidly. She finished in 72nd place and 3rd in her age category, whilst completing the challenging test in 00:57:38.

James set a new course personal best, posting a time of 00:41:36 whilst finishing in 15th position. He also finished 2nd in the MV age category.

Matthew Shipping stormed to victory, winning in a great time of 00:36:09. 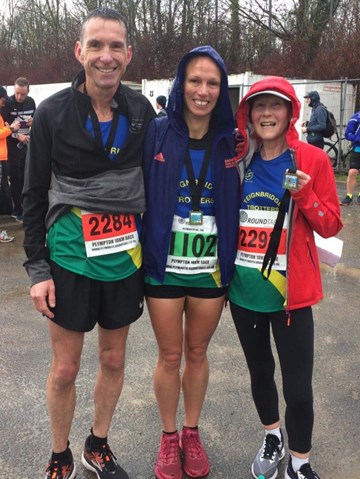 Susanne, Louise and James at The Mad March Hare 10K 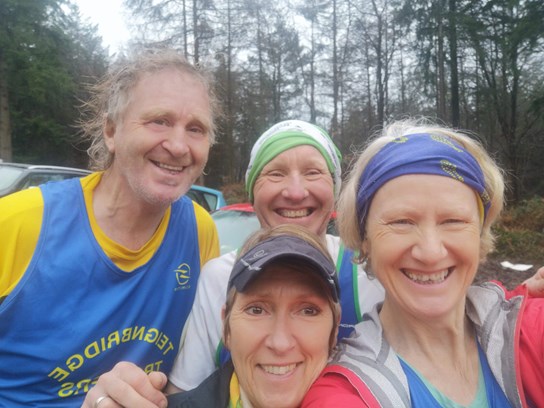 Trotters all smiles and CLEAN before Ashcombe races

A unique event whereby competitors could opt for either distance, or both if they desired.

The races were held around the private land within Grammarcombe Woods, just off the A38 near Haldon. These races were 100% trails and very muddy ones at that. With mud comes very slippery, wet and treacherous conditions. Many of the competitors found themselves on the seat of their pants at some point!!

Eight Teignbridge Trotters braved the conditions, both underfoot and overhead.

Kate Blackmore and Zilpah Walton lined up in the 5K race. Kate took two tumbles but still finished in 18th place, clocking a time of 00:42:16. Zilpah wasn’t going to let the mud get the better of her, as she completed the totally muddy challenge in 1:05:16 to finish 50th. There were 52 entrants.

In the longer distance event, all the Trotters finished high up the leader board. Ella Bowles who thrives in this form of racing, was the lead female Trotter, clocking a great time of 1:12:36 to finish 29th overall.

The event was extremely well organised despite a few course alterations due to fallen trees, and the marshals were all very supportive around the course. 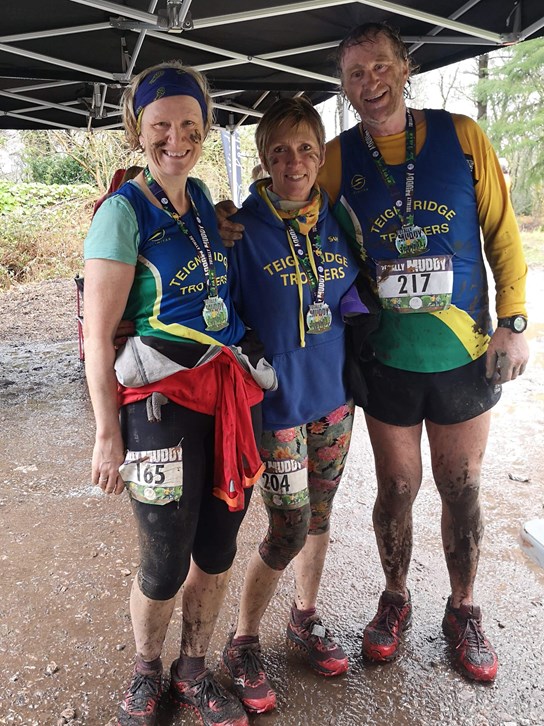 Ruth, Sue and Mark not looking so clean now!! 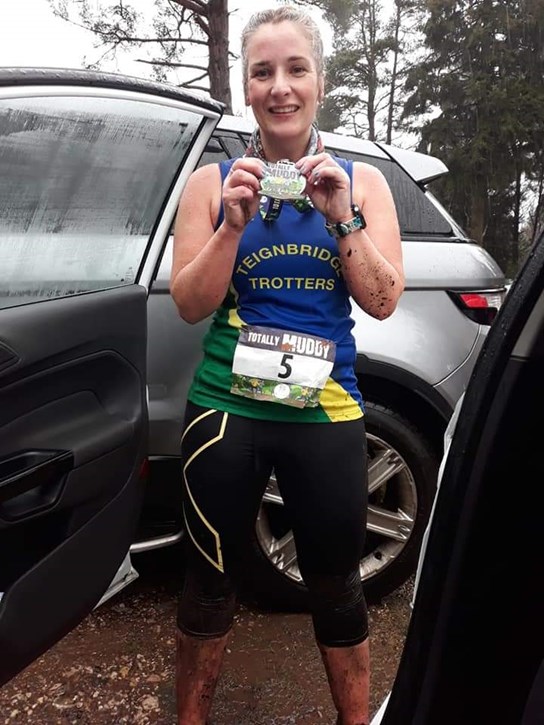 On a surprisingly busy Sunday of racing, despite the Coronavirus situation, the Bath Half Marathon took place. This race is affectionately known as the “Bath Half”. The race is one of the longest established and most popular city road events, and is the largest charity fund raising event in the south west.

The course is a flat and fast, ideal for new P.B’s. The race start and finish was near the Bath Rugby Club and the two lap traffic free route was carefully planned to avoid the hills that surround Bath. The weather conditions were wet and windy as the runners set off. Hundreds of spectators lined the streets and there were bands playing along the route to give a party atmosphere.

Four Trotters started their travels to Somerset at the crack of dawn.

Sam Crowe, despite an Achilles injury throughout the second half of the race, broke the magic 90 minute barrier, clocking a time of 1:29:52 to finish 487th. 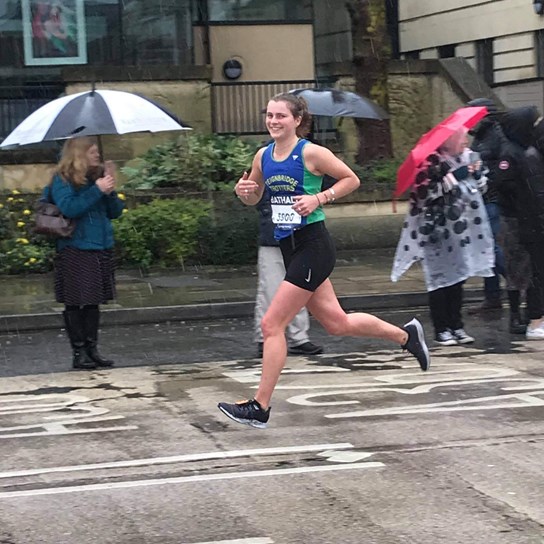 Graydon Widdicombe travelled to Milton Keynes to take part in Enigma Running’s “Week at the Knees” event. This is a series of marathons ran over a week where some competitors do all seven events, whilst others do one or two. The events are held at one of the lakes in Milton Keynes. Graydon’s events were centred around Furzton Lake on the Friday and Caldecotte Lake on the Saturday.


Friday’s event was 17 laps around the lake and with a small field of about 35 runners. For a small number of competitors, this event was already their 5th of the week, so Graydon joined the start line feeling a lot fresher than the other racers! He started off quite steadily, but at the end of lap 8, Graydon was forced to take up the lead!! Having never been in that situation before, this was a strange experience! As the laps ticked, Graydon was well aware that the runner lying in 2nd place was less than a minute behind! Graydon hung onto win the event, clocking a time of 3:44:28. Fantastic result!

Saturday’s event was 7 laps around the lake, but unfortunately Graydon was carrying a nagging injury from the day before! Graydon decided to give the second part of the double ago. The race was going to plan, completing the first half of the race in 1:57:00, but then proceeded to take nearly 3hrs to complete the remaining distance, with a large amount of walking needed to complete the event. Graydon ended up finishing in a disappointing 4:53:42, but it’s another marathon ticked off. He was entered for Sunday’s event but sensibly decided to DNS.

Peter Kirby, due to the cancellation of the Cyprus Marathon, rescheduled his plans and managed to get an entry into The Gloucester 20, a Gloucester AC event.

The race start was at Quedgeley, and the course was a three lap affair, run over quiet country lanes and for the first mile or so of each lap, through an industrial estate. There were a few undulations but in general it was a fast, flat course, making it an ideal race to post a quick time over a distance that you don’t get to race that often.

Peter ran superbly, in very wet and windy conditions, to clock a great time of 2:54:49. His time won the MV 70+ age category award and a fine overall placing of 203rd. There were 338 entrants. Great result Peter.

The Milton Keynes Half Marathon and Festival of Running took place on Sunday 15th March 2020 starting at Xscape city-centre venue.

The festival consisted of a gentle or super-swift 5k event, the classic 10k distance race, a half marathon distance race and a 20 miler.

Natalie Clare decided that the Half was a good option.

The courses were mainly flat, fast and were very well marshalled.

The races started on the central dual-carriageways of Milton Keynes, before winding through some beautiful scenery. There was also a complete lap of Willem Lake.

Natalie ran a well-judged race, tucking in behind a pacer up to mile 12. At this point, probably the only hill in Milton Keynes, meant that Natalie lost touch, but still completed the distance in 1:45:05. Well done Natalie.